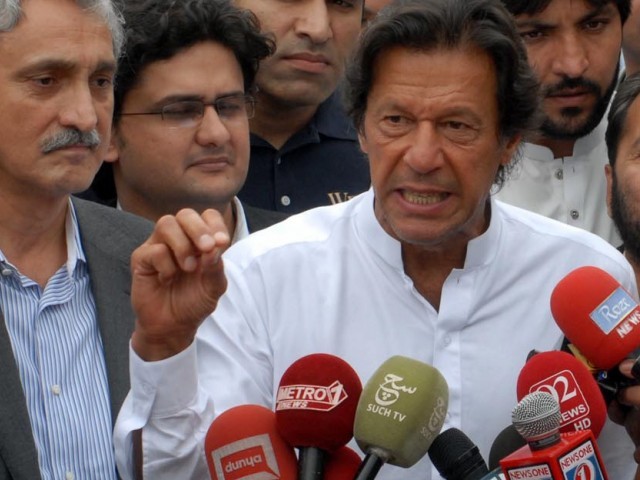 LAHORE: Pakistan Tehreek-e-Insaf (PTI) Chairman Imran Khan on Tuesday claimed that all political parties including Pakistan Awami Tehrik (PAT) have been invited to join our September 30 protest in Raiwind.
Talking to media in Lahore, Imran Khan said his party has no dispute with Tahir-ul-Qadri’s PAT. “All political parties including PAT have been invited to join our September 30 protest in Raiwind. This protest is not for PTI but for the sake of Pakistan,” Khan told reporters in Lahore where he was supervising arrangement for the march.
His comments came hours after senior PAT leader Khurram Nawaz Gandapuri told Samaa that his party would not join the march.
“Since we were not consulted by PTI about their plan to protest in Raiwind, we are not joining the march” the PAT leader.
The PAT’s decision came just three days before the scheduled protest in Raiwind near residence of Sharif family. The march is aimed at pressing the government for Panama Papers investigation against the Sharif Family.
However, sources say, mediators like Shaikh Rashid are still hopeful and making efforts for reconciliation between PAT and PTI – considered two political cousins.
Sources say the PAT is unlikely to reverse its decision.