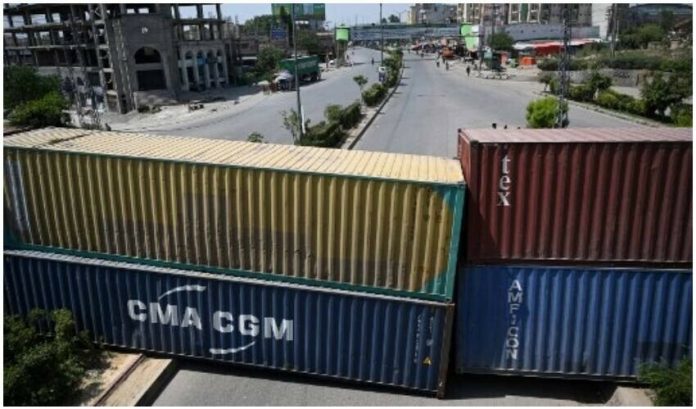 Pakistan Tehreek-e-Insaf (PTI) chief Imran Khan will begin Azadi March today (Wednesday) from Khyber Pakhtunkhwa to Islamabad and go to D-Chowk in front of the Parliament against the federal government as the authorities launch a massive crackdown to stop the PTI activists from entering Islamabad. They have already cut all the road links between Punjab and KP.

The authorities have also imposed Section 144 in Sindh, Punjab, and Islamabad Capital Territory, banning the assembly of more than four people.

Faizabad is a key junction that has seen protests from political and religious parties in the past. Any protest at this point could disrupt life in Rawalpindi and Islamabad.

The authorities have already sealed Islamabad’s red zone where the Parliament, government offices and diplomatic missions are located.

The PTI had earlier hinted that it was planning to stage protracted a sit-in near the Srinagar Highway — the main artery of the city — without entering the red zone, but Imran Khan later changed the plans and announced that he will reach D-Chowk. Consequently, the authorities have blocked all the entry points.

In Rawalpindi, the government has sealed all the bus terminals, effectively shutting down inter-city public transport. Pirwadhai and Soan bus terminals were the first to be sealed.

The authorities have told transporters not to ply their vehicles for the next few days.

The government is also deploying over 22,000 security personnel in Islamabad including 4,000 from Pakistan Rangers and 8,000 from Punjab Constabulary.

At least 2,000 anti-riot police officers and another 2,000 Sindh police personnel have also been called in to assist Punjab police.

All routes from Lahore to Islamabad, including the motorways, have been closed with containers. The tires of the containers full of goods were blown out while Police personnel are deployed at Babu Sabo, Bati Chowk and Thokar Niaz Beg Interchange. Commuters try to make their way across a bridge over the Ravi River along a road partially blocked with containers by local authorities to hinder mobility ahead of the sit-in planned in Islamabad by PTI.

The Punjab government has placed shipping containers over the Ravi Bridge. A heavy contingent of police is deployed there.

The blockade is causing massive traffic jam. On Tuesday, people were forced to carrying their motorcycles on boats to cross the Ravi River.

All the major roads linking Punjab with KP –– the PTI home province where the party is still in power — have been cut using barricades.

Police and district officials blocked the GT Road by placing shipping containers over the Attock Khurd Bridge which marks the border between Punjab and KP.

They also closed the motorway M1 connecting the two provinces.

Meanwhile, other motorways traversing Punjab, including M2, have been blocked at several places.

In South Punjab district of Bhakkar, the authorities closed the road link with KP’s Dera Ismail Khan by placing shipping containers on the Darya Khan bridge.

After the announcement of the PTI sit-in in Karachi, Predi Street and Numaish Chowrangi were closed with containers.

Roads leading to the Peoples Secretariat from Corridor 3 have been closed with water tankers. There is a heavy contingent of police on MA Jinnah Road. Traffic officials have appealed to the citizens not to use MA Jinnah Road suggesting that an alternative route should be taken.

Under Section 144, the display of arms and the assembly of more than five people is banned. Along with this, a ban has also been placed on the tools that could possibly be used for aggression as well as provocative speeches.

It has also been learned that the Punjab government is also considering summoning the paramilitary Rangers to ensure the law and order situation in the province.

Meanwhile, the Islamabad High Court Bar Association has moved the Supreme Court of Pakistan against the closure of roads and highways and arrest of political workers ahead of the PTI’s long march.

The federal cabinet has warned PTI that they will not be allowed to spread chaos, violence, and anarchy by besieging the country’s capital in the name of so-called Long March.

Minister for Information and Broadcasting Marriyum Aurangzeb says the government is fully prepared to deal with the long march of Pakistan Tehreek-e-Insaf (PTI), which is hell-bent on spreading violence, and chaos and anarchy in the country.

Information Minister Marriyum Aurangzeb said it is the state’s responsibility to protect all the citizens, including traders, entrepreneurs, students and women which shall be fulfilled at all costs.