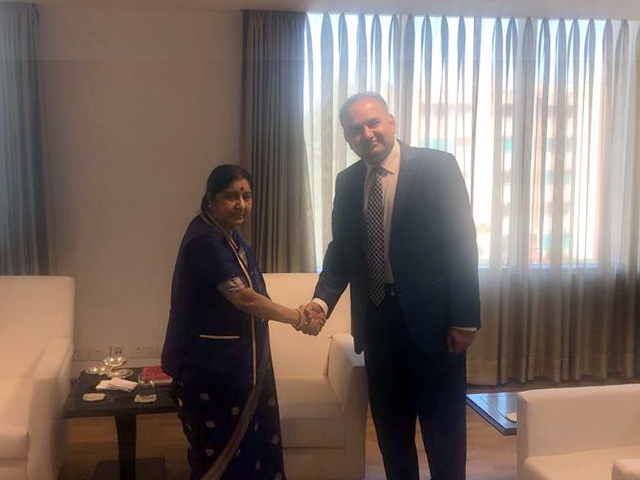 ISLAMABAD: Pakistan Tehrik-e-Insaf (PTI) MNA and Patron-in-chief of Pakistan Hindu Council Dr Ramesh Kumar Vankwani met Indian Prime Minister Narendra Modi, Minister for External Affairs Sushma Swaraj and State Minister for Foreign Affairs and former Indian army chief general VK Singh in New Delhi on Saturday.
According to sources, Ramesh Kumar held one-on-one meeting with Modi for 30 minutes. Modi received him warmly and both leaders hugged each other.
Sources said Dr Ramesh Kumar delivered a message to Indian PM on behalf of Prime Minister Imran Khan which made him clear that both the countries will have to sit on the negotiating table for establishment of permanent peace in the region.
After meeting Modi, Dr Ramesh said he had come to India with the message of establishing peace between both countries. During a meeting with Sushma Swaraj, Dr Ramesh said it was in the interest of people of India and Pakistan that both countries should live in peace. Indian analyst Rawinder Singh Robin said during his visit Ramesh Kumar was playing a role in de-escalating current Indo-Pak tension by meeting Indian rulers. He said Ramesh Kumar would prove a new ray of hope for good relations between India and Pakistan.
Ramesh Kumar said that the leadership in Pakistan will see a change in statements from India after his meeting with Indian Prime Minister Narendra Modi and Foreign Minister Sushma Swaraj.
“I told them that I came to India with a message of peace,” Mr. Vankwani said. “Modi ji was very excited to see me.”
The PTI MNA is currently in India on a religious visit. The Pakistani lawmaker’s visit to Delhi comes a few days after a suicide bomber rammed an explosives-laden vehicle into an Indian convoy in Pulwama in Indian-administered Kashmir, killing over 40 soldiers.
The attack was reportedly claimed by outlawed Jaish-e-Mohammad, a militant group led by Maulana Masood Azhar.
Tensions between the two countries are rising as leaders from both sides made highly opinionated statements.
Prime Minister Imran Khan has authorized the armed forces to “respond decisively and comprehensively to any aggression or misadventure by India”.
The government of Punjab has taken control of Jaish-e-Muhammad’s headquarters in Bahawalpur. According to a source in the Punjab government, the order to take over Subhanallah mosque and its seminary came directly from the National Security Committee.
“I assured Sushma Swaraj and Narendra Modi that Pakistan won’t allow use of its soil against India,” Mr Vankwani said. “We need to build confidence between the two nations.”
I have told them that the Pakistan government and institutions were not involved in the Pulwama attack, the PTI lawmaker said.
“Pakistan is taking action against all the outlawed organizations,” Mr. Vankwani added. “I told them that I am coming to meet you after ‘Ganga-ashnan’ and I won’t lie to you; we will not allow anyone to conspire against you from our dharti (land).”