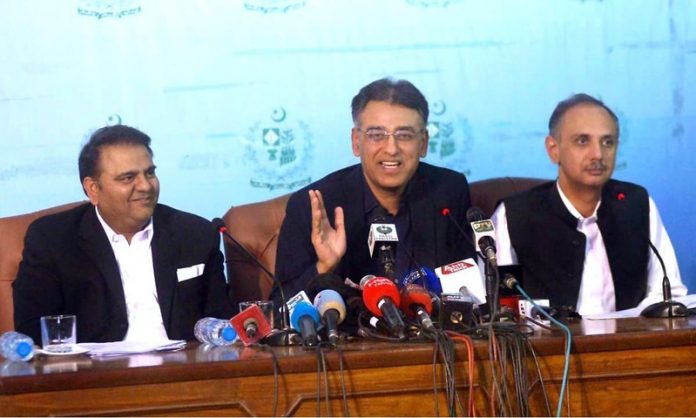 ISLAMABAD: Pakistan Tehreek-e-Insaf (PTI) Parliamentary Party in its meeting held here at Parliament House on Wednesday discussed the Finance Bill to be tabled in the National Assembly on January 23.
Chief Whip PTI MNA Muhammad Aamir Dogar talking to media said that during the meeting Federal Minister for Finance Asad Umar and State Minister for Revenue Hammad Azhar briefed the meeting regarding the supplementary budget and proposed projects.
He said that the meeting was attended by the PTI members of Parliament.
He said that the meeting was aimed at taking into confidence the PTI parliamentarians regarding supplementary budget.
He said that government would resolve the problems of farmers in the country on priority, adding that 70 per cent population was living in rural areas and agriculture was their main source of income.
Earlier, Asad Umar said that mini budget that will be presented by the government on 23rd of this month, would aim at promoting investment and entrepreneurship.
He said the mini budget would play important role in ensuring friendly environment for the business community.
On the other hand, Pakistan Peoples’ Party (PPP), Pakistan Muslim League (PML-N) and other political parties in opposition agreed to adopt joint strategy over the national issues.
Opposition Leader Shahbaz Sharif and PPP Chairman Bilawal Bhutto Zardari said the committee will formulate proposals for adopting a joint line of course to help resolve the national issues.
The two leaders regretted that the PTI government has failed on the economic front.
Bilawal Bhutto Zardari said Charter of Democracy will be revisited keeping in view the ground realities and political situation. While PPP Chairman Bilawal Zardari said on his Twitter account that they held “positive meeting of opposition parties.”