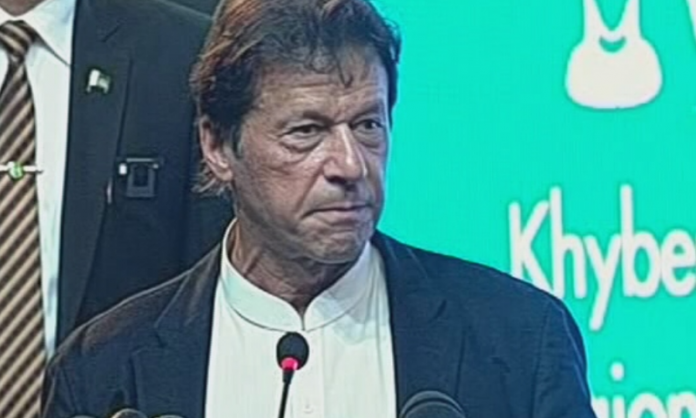 PESHAWAR: Prime Minister Imran Khan on Friday said that the Pakistan Tehreek-i-Insaf (PTI) had won the people’s mandate in the 2018 general elections without dishing out billions of rupees in development funds and solely on the basis of its performance.
Speaking at a ceremony held in connection with the completion of the Khyber Pakhtunkhwa government’s 100 days in office, the prime minister thanked the people of KP for re-electing his party this year and said that the PTI had not employed any “traditional, political tactics” to win the polls.
“In 2013 elections, we got a coalition government and in 2018, the people of Pakhtunkhwa who never give another chance to political parties gave the PTI a fantastic mandate,” he said in his address at Peshawar’s Nishtar Hall.
In a reference to the PML-N, he claimed that the previous government of Punjab had spent billions in development funds in order to influence the 2018 elections.
Before the ceremony, the premier inaugurated a shelter home in Peshawar during his one-day visit to the provincial capital.
According to Radio Pakistan, the prime minister will inaugurate three more shelter homes that have been built by the Khyber Pakhtunkhwa government as part of its 100-day plan. The homes will have the capacity to accommodate more than 400 people.
Last month, the premier had laid the foundation stone of a shelter house for the homeless in Lahore.
An official statement had said the prime minister would also attend a special meeting of the KP cabinet today. He will be briefed on the province’s 100-day performance.
It said that the provincial government had identified 25 initiatives to pursue during the next five years under the premier’s directions.
In health sector, the KP government has planned to recruit additional 4,000 lady health workers (LHWs) to ensure coverage of all rural areas in addition to rolling out a rural ambulance service to transport mothers and children to health facilities. The government will also ensure that 80 per cent of expectant mothers give birth in health facilities.
In agricultural sector, the government plans to introduce a functional IT-based market intelligence system to increase farmers profit by 15-20 per cent along with reclaiming 5,500 hectares of cultivatable wastelands.
It said that KP would become the first province to launch police station-based budget this year along with fourfold increase in the number of female police officers.