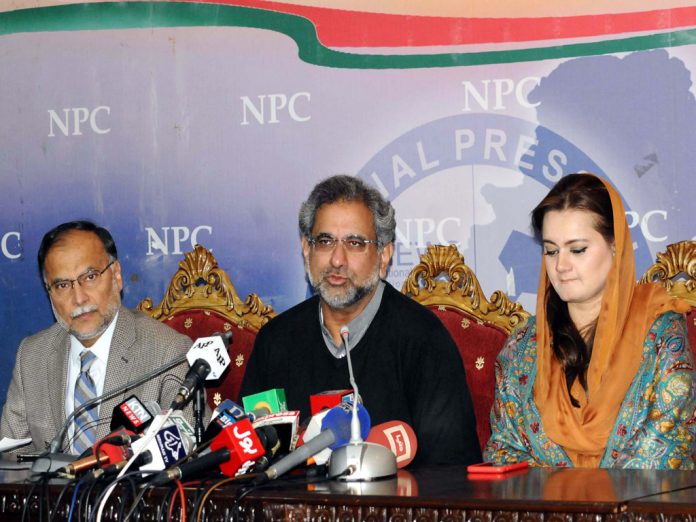 ISLAMABAD: Pakistan Muslim League-Nawaz (PML-N) leaders on Friday has said that no one is satisfied with the performance of incumbent government of Pakistan Tehreek-e-Insaf (PTI).
While addressing a press conference, PML-N and former Prime Minister Shahid Khaqan Abbasi said that the governance model presented by PTI government has badly failed.
Pakistan needs change now, he stated.
Meanwhile, ex-interior minister Ahsan Iqbal said that the government is not taking any action against mafias. Nation’s money is being looted by intensifying flour and sugar crises, he added.
Earlier in Karachi, Shahid Khaqan Abbasi said a new political contract should be done followed by free and fair elections to solve the national issues.
The erstwhile premier held a press conference along with PML-N delegation after meeting Farooq Sattar in Karachi and maintained that dialogues are not being held among political parties for the first time and the incumbent government is responsible for that.
He said, “Pakistan will not make progress without Karachi which is its heart. PML-N started development projects in the metropolis during its tenure. We do not crave power; we only highlight issues of common people.”
Talking on the occasion, Farooq Sattar said PML-N’s previous tenure was better than the current term of Pakistan Tehreek-e-Insaf (PTI) if comparison is drawn between both.
He said, “The incumbent government has badly failed in resolving people’s issues. We do not want package and donation for Karachi. The importance of this city cannot be neglected and it should be given at least Rs 300 billion annually.”