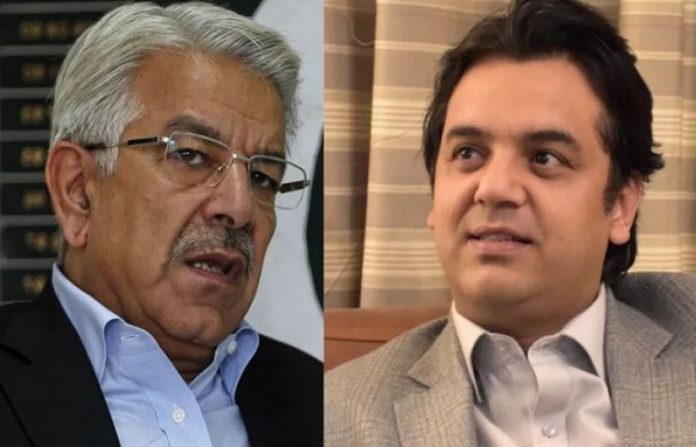 ISLAMABAD: Pakistan Tehreek-i-Insaf (PTI) leader Usman Dar on Tuesday submitted documents with the National Accountability Bureau (NAB) containing evidences against Foreign Minister Khwaja Asif in money laundering and corrupt practices case.
Dar said that although he had a personal enmity with Khwaja Asif but submitting evidences against him in NAB was only aimed at exposing his money laundering in order to save country from such practices.
He said that he had submitted records of all secret bank accounts and business of Asif in Dubai to NAB authorities. “I have also given the details of his wife’s bank account in United States,” he said and further claimed that in 80’s Asif was a bank clerk and it is astonishing as to how he had become a billionaire now.
He said that he would submit more evidences against him in next week. He also requested the NAB authorities to finalize the proceedings of the case as soon as possible.
He said that the PML-N is using foul language against the armed forces and their slogan of respect for vote is out of mind.
On March 18, the National Accountability Bureau summoned Pakistan Tehreek-i-Insaf leader Usman Dar on Tuesday morning to submit evidences of money laundering complaint submitted from him against the foreign minister Khwaja Asif.
It is pertinent to mention here that Usman Dar submitted a complain in NAB Islamabad against foreign minister Khwaja Asif over his alleged money laundering and corruption activities.
The NAB authorities in response to the complaint wrote a letter to Usman Dar which stated that they had analyzed the complaint regarding Khwaja Asif’s alleged money laundering and corruption and demanded of the complainant to submit evidences and documentary proofs if any against the accused in NAB Rawalpindi office on Tuesday morning.