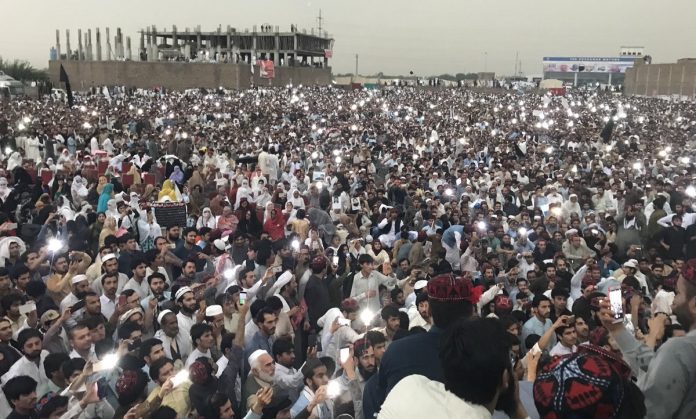 PESHAWAR: Speakers at the Pashtun Tahafuz Movement’s (PTM) grand gathering in Peshawar on Sunday demanded release of missing persons as well as provision of basic human rights to Pakhtuns in Pakistan. They also demanded a human rights commission be formed to investigate the issues of residents of FATA.
Huge number of people from Khyber Pakhtunkhwa and Federally Administered Tribal Areas (FATA) participated in the gathering at Pishtakhra Chowk near Ring Road. The participants intermittently chanted the movement’s rallying slogan ‘Da Sang Azadi Da (what kind of freedom is this). 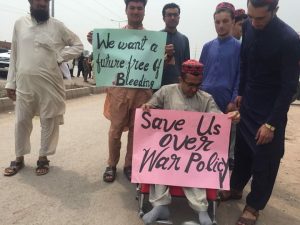 The families of missing persons arrived at the gathering holding pictures of their loved ones, whose whereabouts remain unknown.
While addressing the charged audience, PTM leader Manzoor Pashteen said that they are only against the oppressors. “We are only the ‘agents’ of our nation,” he said.
Pashteen asked that what has happened so far for the missing persons. He pleaded that the mothers and elders whose beloved are missing should not be forced. “In Karachi, money is taken in return for bodies. Even Genghis Khan did not take money after killing people,” Pashteen said. 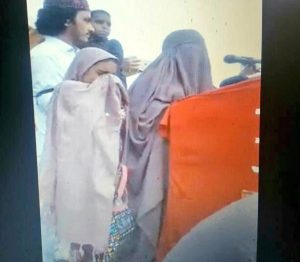 The PTM leader said that it is now the turn of former TTP leader Ehsanullah Ehsan after Rao Anwar adding that the former TTP spokesperson would have to be brought to the courts. “After Ehsanullah, we will bring former president Musharraf to the courts,” Pashteen pledged. 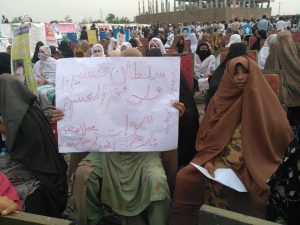 Manzoor Pashteen also spoke about how businesses in FATA have been affected by the ensuing violence. “Fruit from Wana and Swat is being sold in Lahore instead of Peshawar.”
Earlier, highlighting the plight of the tribal people, PTM’s central leader Ali Wazir said that bloodshed was being spread across the country. “The people of FATA have been rendered homeless while their belongings have been destroyed,” he added, demanding a human rights commission — rather than a judicial commission — to investigate the issues of FATA’s people.
Speaking at the event, PTM leader Sanna Ejaz demanded a closure of National Logistics Cell units in Torkham, Chaman and Ghulam Khan, and the return of properties in Swat and Malakand.
“The people of tribal areas should be given the same rights as the people of Lahore and Islamabad,” she said, demanding an end to target killing of Pakhtuns and the provision of basic human rights to the people of tribal areas.
Other speakers demanded that facilities such as hospitals, schools and colleges should be provided in FATA, vowing to continue their demand for rights within the ambit of the Constitution.
“Sindhis, Baloch and even the oppressed Punjabis are looking towards you today,” a speaker said in Urdu, addressing the crowd, adding that the movement’s leader Manzoor Pashteen is the last hope of the oppressed in the country.
The speakers included a mix of emotionally charged young men and women as well as elders who sang poetry.
Leaders of other political parties also spoke at the gathering. Pakhtunhwa Milli Awami Party (PkMAP) Senator Usman Kakar said that whoever wants peace, education, employment and hospital for the Pakhtuns is a friend, while those wanting unrest are the enemy.
There were unconfirmed reports of 3G and 4G internet being interrupted in the area. A Twitter account said to be the movement’s official account alleged that “internet connectivity was being constantly interrupted by the state”.