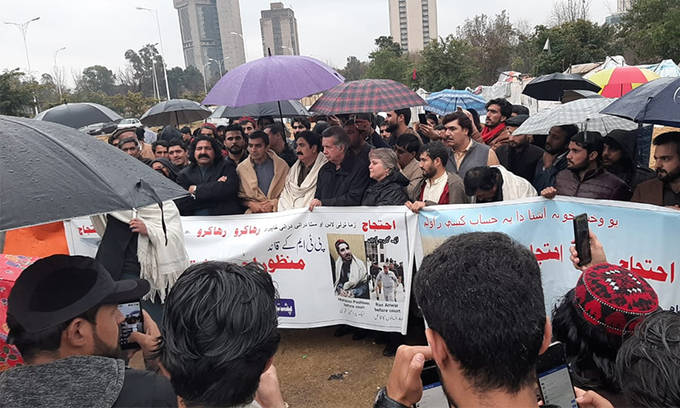 ISLAMABAD: Pashtun Tahaffuz Movement (PTM) leaders Mohsin Dawar, Asmat Shahjehan among thirty others PTM activists were taken into custody on Tuesday in Islamabad where they were demonstrating against PTM chief Manzoor Pashteen’s arrest.
Akhtar Ali, the station house officer of Kohsar police station, confirmed the PTM leaders arrest from outside the Islamabad press club. A large number of supporters and PTM workers were attending the protest, including politicians Afrasiab Khattak and Bushra Gohar.
The development was also confirmed by Dawar.
“We are in police custody and [have been] shifted to Kohsar police station,” he told.
A video, shared by BBC correspondent Secunder Kermani on Twitter, purportedly showed the PTM leaders being arrested by the police.
Protests against the PTM chief’s arrest were also held in various areas including Mir Ali, Tank, Miranshah and Zhob.
In Peshawar, PTM workers and supporters gathered outside the city’s press club to protest against Pashteen’s arrest and demanded his immediate release.
PTM workers and supporters gather outside Peshawar Press Club to protest against Manzoor Pashteen’s arrest. The PTM chief was arrested on Monday from Peshawar’s Shaheen Town and was sent to the city’s central jail on a 14-day judicial remand. Earlier today, he was shifted to Dera Ismail Khan on a local court’s orders.
According to police, a case was registered against the PTM chief at the City Police Station in DI Khan on January 18 under sections 506 (punishment for criminal intimidation), 153-A (promoting enmity between different groups), 120-B (punishment of criminal conspiracy), 124 (sedition), and 123-A (condemning the creation of the country and advocating the abolishment of its sovereignty) of the Pakistan Penal Code.
According to the first information report, a copy of which is available with Dawn.com, Pashteen and other PTM leaders had attended a gathering on January 18 in DI Khan where the PTM chief had allegedly said that the 1973 Constitution violated basic human rights. The FIR added that Pashteen also made derogatory remarks about the state.
Police had also arrested nine other PTM workers who were identified as Muhammad Salam, Abdul Hameed, Idrees, Bilal, Mohib, Sajjadul Hassan, Aimal, Farooq and Muhammad Salman.