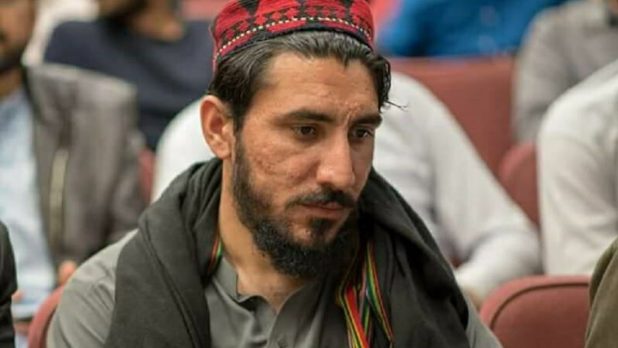 DERA ISMAIL KHAN: A sessions court in Tank district on Saturday granted bail to Pashtun Tahaffuz Movement (PTM) chief Manzoor Pashteen in two cases of sedition while he was also granted bail in a similar case by a Dera Ismail Khan court, PTM lawyers confirmed.
Pashteen’s bail applications in two other cases — also pertaining to sedition — were approved by the DI Khan court last Saturday.
MNA and PTM’s senior leader Mohsin Dawar also confirmed the development, saying Pashteen will be released from jail on Monday after completing legal formalities.
Pashteen was arrested on January 27 in Peshawar’s Shaheen Town and sent to Peshawar Central Jail on a 14-day judicial remand by a magistrate.

Also read: Court grants bail to PTM’s Manzoor Pashteen in two sedition cases
A day after his arrest, a Peshawar court had rejected the PTM leader’s bail plea and ordered his transfer to DI Khan, where he is currently imprisoned.
Dawar said that police had registered five cases against Pashteen prior to his arrest in Peshawar, adding that the DI Khan court had accepted his bail applications in three cases.
The additional district and sessions judge Tank granted the PTM leader bail against two personal sureties and a surety bond worth Rs100,000, PTM lawyer Farhad Afridi said.
“We are trying to complete the legal formalities as soon as possible,” he said, adding that if they are unable to complete the legal procedure today then Pashteen will be released on Monday.
The lawyer added that the PTM is holding a public gathering tomorrow and if Pashteen is released today, he will “definitely join the jalsa”.
Initially, Pashteen was arrested in a case registered against him at DI Khan’s City Police Station under sections 506 (punishment for criminal intimidation), 153-A (promoting enmity between different groups), 120-B (punishment of criminal conspiracy), 124 (sedition), and 123-A (condemning the creation of the country and advocating the abolishment of its sovereignty) of the Pakistan Penal Code.
According to one FIR registered on January 18, Pashteen and other PTM leaders had attended a gathering that day in Dera Ismail Khan where the PTM chief had allegedly said that the 1973 Constitution violated basic human rights.
The FIR added that Pashteen also made derogatory remarks about the state.