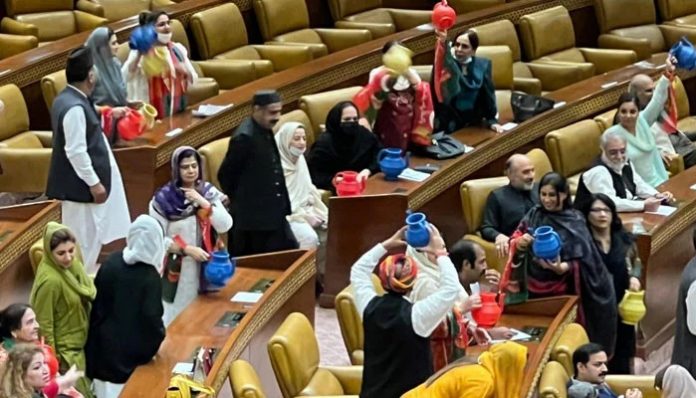 LAHORE—Deputy Speaker Dost Muhammad Mazari was unable to carry out the election of new chief minister amid sloganeering, chaos and protests.

Pakistan Tehreek-e-Insaf (PTI) members brought lotas with them which they hurled in the assembly hall. As Deputy Speaker Dost Muhammad Mazari arrived at the dise to chair the Punjab Assembly session, PTI members hit him with lotas. Mazari was even slapped by the members after which he was escorted by the Seargant-At-Arms. PTI also threw lotas at the opposition benches while slogans were chanted by both the parties.

After the violence, anti-riot force that was positioned in the assembly premises entered the assembly hall. However, they were later made to leave after PTI members objected to their presence.

The session, which was scheduled to start at 11am delayed by more than 90 minutes.

Shahbaz is the opposition candidate, supported by the PML-N, PPP and Independent candidates. Elahi has the backing of the PTI, PML-Q and the Rah-e-Haq Party.

The session is being held after the Lahore High Court rejected the pleas of Speaker Pervaiz Elahi and restored the powers of Mazari to conduct the election April 16 (today).

Earlier this month, Elahi withdrew Mazari’s powers after their disagreement on the session’s date. The latter then filed a petition with the LHC which overturned the speaker’s decision.

The session is being held under strict security arrangements. Section 144 has been imposed with the 500m radius of the Assembly. To control the situation inside the house, Punjab Police, Ranger, Anti-riot force and women police officers have been stationed around the building.

The PML-N-led opposition parties submitted the no-confidence motion against former Chief Minister Usman Buzdar March 28. However, he resigned March 28, leaving the motion to be infeffectoive.

Buzdar’s resignation was accepted by former Governor Chaudhry Sarwar April 1. Since then, Buzdar has been serving as an interim chief minister.

In the house of 371-member Punjab assembly , PTI is the largest party with 183 seats and its allies in the government are PML-Q with 10 seats, and one seat of Pakistan Rah-e-Haq Party. Five independent members also support the government. From opposition benches, the Pakistan Muslim League-Nawaz has 165 seats and PPP seven seats.

However, the disgruntled members of PTI – divided into two groups led by Jehangir Tareen and Abdul Aleem Khan – are set to disrupt this numbers game. These two groups have around 24 lawmakers, who have announced their support for Hamza Shahbaz.