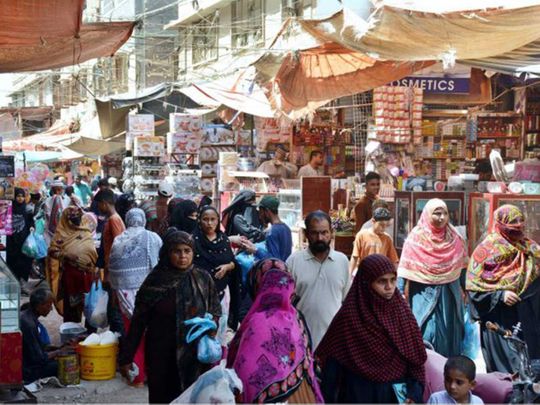 LAHORE: Following the continuous violation of SOPs and precautionary measures by the traders, the Punjab government is considering closing various markets in Lahore.
According to sources, a high level meeting was held under the chairmanship of Punjab Chief Minister Sardar Usman Bazdar. The meeting expressed serious concerns over the situation in the markets.
Sources said that SOPs were being violated in markets and the proposal to close some markets immediately in being considered.
According to sources, the government is considering to close Hall Road, Shah Alam Market, Anarkali and Azam Market in Lahore, while there are no security measures at Ichhra Bazaar, Township Bazaar and other places.
Sources privy to the government said that the shops will be challaned in the first phase and then the shops will be sealed as SOPs do not seem to be implemented.
On Tuesday, Punjab government had threatened to re-impose a lockdown if the businesses continue to flout SOPs issued by the government as a part of easing the restrictions imposed to contain the spread of COVID-19.
Speaking at the LCCI, Provincial Minister for Industries and Commerce Mian Aslam Iqbal said that the actions of the traders are not pleasing and are affecting the efforts of the government to control the outbreak of COVID-19.
The minister said if traders continue to disregard the SOPs agreed on before easing the lockdown, Punjab government won’t think twice about re-imposing the lockdown. This time around, however, the lockdown will be stricter than the previous one.
Mian Aslam Iqbal said Lahore has become the centre of the coronavirus in Punjab and the locally transmitted cases of the virus are increasing the country, adding that the traders must show a sense of responsibility to avoid the lockdown reimposition.
He said the lives of people have been put on stake for a few rupees. “I am tired of advocating for traders, but they have cross all the limits,” he said and added the attitude of the responsible people is beyond comprehension.
The provincial minister appealed that children should not be allowed in the markets while guards should be posted in the shops and markets, adding that all shopkeepers should arrange hand sanitizers.