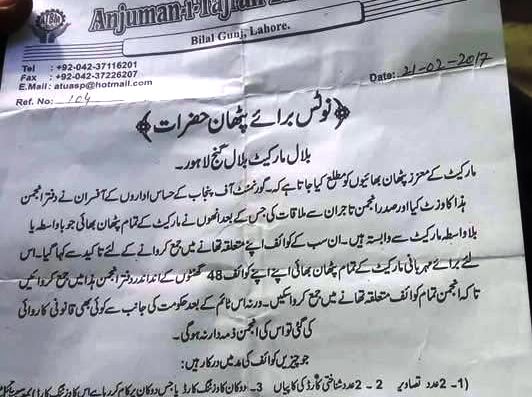 LAHORE: Punjab police and trade unions have been accused of racial profiling for asking Pashtun residents and shopkeepers to submit details and particulars of their stay and businesses in the province.
“All respected Pashtun members are informed that intelligence officers of the Government of Punjab visited our office and asked us to submit data of all the Pasthun members who are directly or indirectly linked with the market, to respective police stations,” says a notice issued by Anjuman-e-Tajiran Bilal Market, Lahore this week.
“It is, therefore, advised to all Pashtun brethrens to submit their photographs, copy of CNICs and visiting cards to union office within the next 48 hours” the notice said.
The union warned that it would not be responsible if any legal action was taken against Pashtuns who failed to comply with the notice
A second traders union of Lahore has called for Punjab Law Minister Rana Sanaullah and police officials to take action against non-Punjabi people selling dry fruits and sun glasses in the market.
Earlier this week, a notice issued by Mandi Bahauddin police asked residents to remain vigilant and keep an eye on Pathans and non-Punjabis.