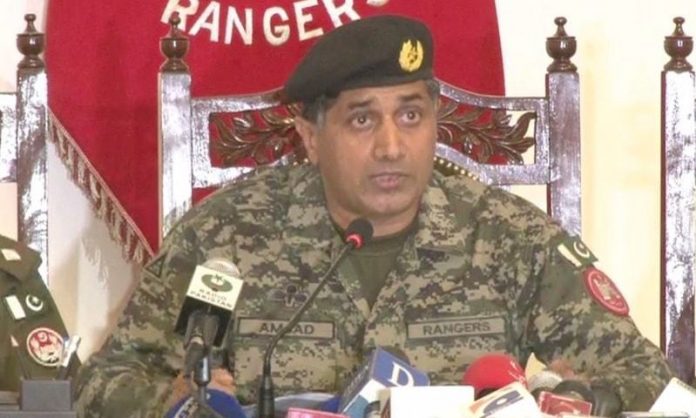 LAHORE: The Punjab Rangers on Thursday warned that the display of weapons and the employment of security guards for personal safety are illegal under the National Action Plan (NAP).
“It follows that only security personnel of registered government institutions will be deployed,” Punjab Rangers Col Amjad Iqbal said during a press briefing.
He added that Pakistan Rangers Punjab will work with the Punjab police to conduct operations and take strict action against those who violate the law in this manner.
Col Amjad also stated that strict action will be taken against private security personnel found to be in illegal possession of or using uniforms designated for the army, civil or military institutions.
During the briefing, the colonel also provided details regarding operations carried out by the Punjab Rangers.
He said that four terrorists affiliated with the Tehreek-e-Taliban Pakistan were killed during a recent operation and a large cache of weapons were recovered from them.
Havaldar Khalid, an officer of the Punjab Rangers, was injured in the operation when militants opened fire, Col Amjad said.
“Four suicide jackets, one rocket launcher, six rockets, six detectors, four charged boosters and 18 other weapons were recovered from the terrorists,” he said.
Operations were also conducted in Sheikupura, Sambrial and Kharian, Col Amjad said.
“During these operations, six suspected militants were taken into custody,” he said, adding that a large number of weapons was also seized from them.
“Pakistan Rangers Punjab is engaged in carrying out operations in all suspicious areas with other institutions,” the colonel added.