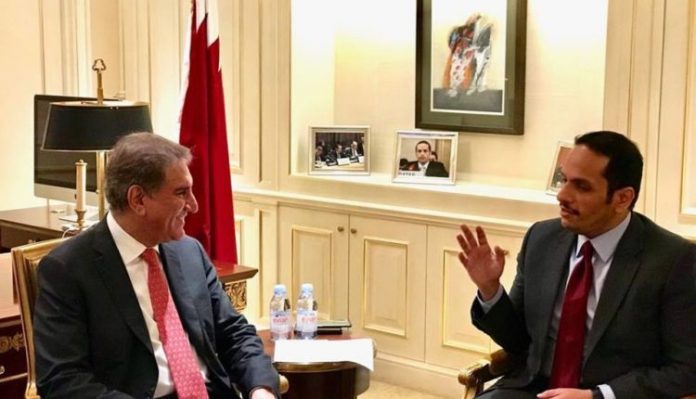 NEW YORK: Qatari Foreign Minister Mohammed bin Abdulrahman Al Thani made an overture to Pakistan by offering employment opportunities to 100,000 Pakistani workers.
The positive gesture of Qatar’s Foreign Minister came on the side lines of 73rd session of the UN General Assembly where Foreign Minister Makhdoom Shah Mahmood Qureshi held a bilateral meeting with his counterpart Mohammed bin Abdulrahman Al Thani.
During the meeting, Foreign Minister Shah Mahmood Qureshi welcomed the increase in the bilateral trade by 53%. He appreciated the formal operationalization of the Hamad Port and stressed to unleash the great economic potential between the two countries by increasing the exports in sectors such as food items, construction material, pharmaceuticals, medical equipment, sports goods and fabrics.
Minister Shah Mahmood Qureshi proposed early visit of the Qatari Chamber of Commerce and Industry and emphasized on activating the Joint Business Council, agreed between the two countries in 2017.
Qatari Foreign Minister Mohammed bin Abdulrahman Al Thani congratulated Shah Mahmood Qureshi on the successful election in Pakistan.
The two Foreign Ministers applauded the close brotherly relationship between two countries and vowed to strengthen the ties by forging partnerships and enhancing economic and trade relations.
Both sides reiterated that Pakistan and Qatar are important members of the Muslim world and vowed to continue to work together at all fora for the advancement of common causes.