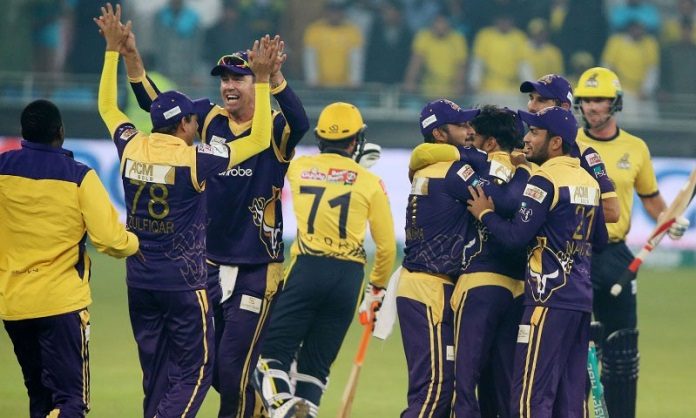 SHARJAH: Ahmad Shahzad’s magnificent innings in the first play off helped Quetta Gladiators set a huge target of 201 against Peshawar Zalmi at Sharjah. Quetta defended the total and grab the win on the last ball of the last over. Ahmed Shahzad declares man of the match. Quetta qualifies for the final for the second time.
Peshawar Zalmi collapsed in the last over of the match. Left arm spinner, Muhammad Nawaz was the bowler. Last over, on his first ball, captain Sammy failed to score a run. On his second ball, Sammy dispatched it for a four. On the third ball, Sammy took a single. From here on the match turned and on the forth ball, Chris Jordon got caught behind. On the fifth ball, Wahab Riaz was run out while trying a foolish run while on the last ball, when only 2 runs were required, Hasan Ali failed to score any run and got run out.
From Zalmi, Hafeez made 77 runs on 47 balls, David Malan scored 56, Shahid Afridi scored 34 while captain Sammy was not out on 11 runs.
Sent into bat first, Shahzad scored 71 off 38 with the help of 4 sixes and 7 fours in partnership with Kevin Pietersen, who made 22-ball 40 to guide Gladiators to 200-7 in 20 overs game.
Wahab Riaz was pick of the bowlers for Zalmi bagging 3 wickets at the expense of 39 runs.