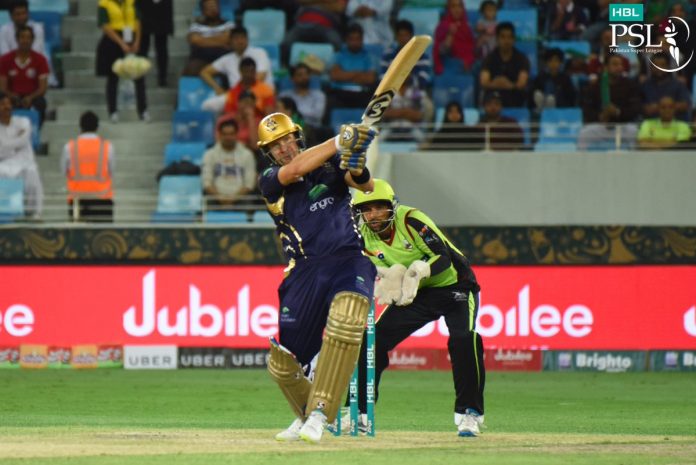 DUBAI: Shane Watson struck 42-ball 66 as Quetta Gladiators beat Lahore Qalandars by 9 wickets in the fifth match of the Pakistan Super League (PSL) at Dubai International Cricket Stadium in UAE on Saturday.
Watson hit 5 6s and 5 4s to guide his team to a big win. He was supported by Asad Shafiq who made 38 runs off 36 balls.
Earlier, a familiar collapse due to some reckless batting restricted Qalandars to 119/0 in 20 overs despite a solid start.
A 66-run knock by Shane Watson and four overs of Jofra Archer with figures of 3/23 helped Gladiators register their win.
Gladiators were off to a decent start. Shane Watson scored a quick half century after opening for the side. Narine got Watson out, but the damage had already been done as he scored 66 from 42 balls with five massive sixes.
Asad Shafiq scored 38 from 36 balls to contribute from his side. Qalandars bowlers were unable to make breakthroughs. Narine was the only bowler to take wicket.
Qalandars lost their first wicket at 46 that of Sunil Narine who gave a flying start in the first three overs. He scored 28 from 10 balls with two sixes to Shane Watson, before mis-hitting one of Rahat Ali. Later on, Qalandars kept on losing wickets cheaply.
Sohail Akhtar scored 20 from 27 balls including one six.
Mohammad Nawaz took two wickets including Brendon McCullum who got out on 30 off 18. Archer took three wickets in his four overs.