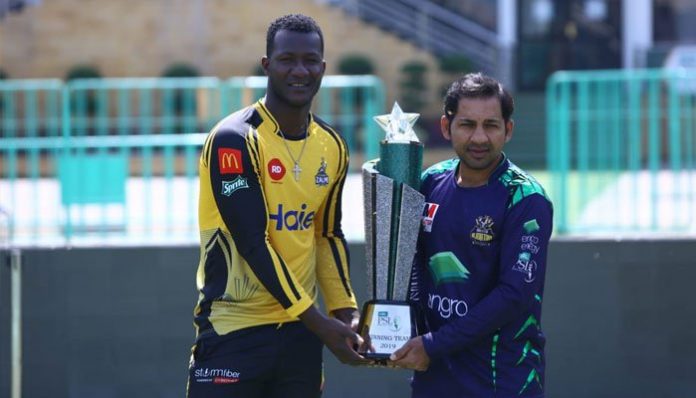 KARACHI: Two-time finalists Quetta Gladiators and one-time champions Peshawar Zalmi will square-off in the ‘El Clasico’ final of the Pakistan Super League at the National Stadium Karachi today, with both captains promising to fight till the last ball.
The match will start at 8pm PST.
Led by Pakistan skipper Sarfaraz Ahmed, Quetta have finished runner-up in 2016 and 2017, while Peshawar outlasted them in the third vs fourth Eliminator in 2018, but were defeated in this season’s qualifier.
The Quetta-Peshawar rivalry began in 2016 when both the sides shared a match each in the first round, before Gladiators won the war of Qualifier when medium-pacer Aizaz Cheema took two wickets and conceded a single off the last-ball as Peshawar failed to chase down target of 134 runs.
Peshawar won one of the league matches in 2017, while the other was rained-off in Sharjah before another Qualifier went to Quetta, this time too Peshawar falling short by one-run in pursuit of a 201-run target.
On that day, Hasan Ali was run-out when two runs were needed off the last-ball.
But Peshawar had the last laugh, clinching the final and the title with a big 58-run victory against a depleted Quetta, who were without their top foreign players.
They again shared a league match each in 2018, before Peshawar snatched victory from the jaws of Quetta by one-run in the Eliminator in Lahore.
Needing 25 runs off the last over, Quetta were brought within a stroke of victory by Anwar Ali who hammered three sixes and a boundary off spinner Liam Dawson.
But, needing three for victory, Anwar’s partner Mir Hamza was run-out as the batsmen tried to take a second run.
This year, Quetta has an edge leaving the head-to-head in their favour with seven wins, five defeats and one no-result in 12 contests.
The Yellow Storm will be led by fans’ favourite Darren Sammy, whose inspirational leadership took Zalmi to claim the crown in the second edition.
However, Sammy’s fitness issues remain a concern. Zalmi will also have the services of Pakistan’s most successful Test captain Misbah-ul-Haq.
The batting line will also feature PSL’s most successful batsman Kamran Akmal and all-rounder Kieron Pollard. The side has also picked Imam-ul Haq, who is in a good knick in limited overs cricket.
On the bowling front, the likes of Wahab Riaz, Hasan Ali and Chris Jordan compile a potential match-winning attack.
Coming to the Quetta Gladiators, the Sarfraz Ahmed-led side will feature former Australian all-rounder Shane Watson.
The Gladiators will also feature a potent bowling attack, including the T20 specialist Sohail Tanvir, Mohammad Nawaz, Mohammad Irfan Jr., and Mohammad Asghar.