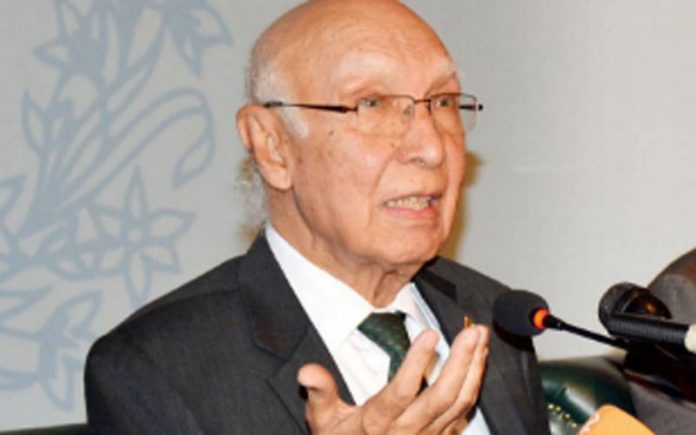 ISLAMABAD: Adviser to the Prime Minister on Foreign Affairs Sartaj Aziz on Wednesday told the Senate Standing Committee on Foreign Affairs that former chief of army staff Raheel Sharif had taken command of the 41-nation Saudi-led military coalition in his personal capacity.
The adviser was briefing the committee on the on-going diplomatic rift in the Middle East that began after Saudi Arabia, Egypt, the United Arab Emirates (UAE), Bahrain, Yemen and the Maldives severed their ties with Qatar.
During the committee’s session, PPP Senator Kareem Khawaja had voiced his dissatisfaction with Pakistan’s role in the Gulf crisis and added that the former army chief should be asked to return to Pakistan voluntarily.
Pakistan Tehreek-i-Insaaf Senator Shibli Faraz pointed out that if Sharif was asked to return back to Pakistan, relations with Saudi Arabia would be negatively affected.
Aziz told the committee that Sharif was not sent by the government to lead the alliance and therefore, cannot be asked to return.
Aziz added that the resolution adopted by Pakistan on the Yemen conflict will serve as the foundation for the role Pakistan will adopt in the current Gulf crisis.
He was referring to the resolution adopted unanimously by the parliament in 2015 when Saudi Arabia launched a military operation against Yemen.
The resolution proposed that Pakistan “should maintain neutrality in the conflict so as to be able to play a proactive diplomatic role to end the crisis”.
The government had decided at the time to continue with its pursuit of a diplomatic solution to the war in Yemen.
Aziz on Wednesday told the committee that Pakistan will maintain that position of neutrality in the deepening Gulf crisis and will refrain from interfering in the affairs of other countries.
Committee Chairperson Nazir Sadiq said that Prime Minister Nawaz Sharif had not only met with Saudi King Salman bin Abdulaziz al-Saud as part of his mediational efforts in the Gulf, but also spoke with Qatari Emir Sheikh Hamad bin Khalifa al-Thani on the phone regarding a resolution to the rift.