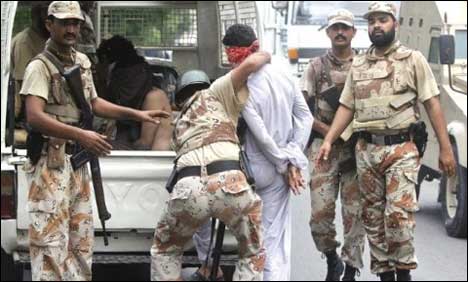 KARACHI: The Pakistan Rangers -Sindh launched operations in various parts of the city and arrested three accused allegedly involved in different crimes including target killing.
The Rangers also recovered weapons, ammunition and stolen property from their possession, said a statement issued here on Tuesday.
The paramilitary force have arrested a member of banned organization from Itehad Town area, identified as Muhammad Abid alias Arif Guddu.
The accused is allegedly involved in various incident of target killings in Orangi Town and North Nazimabad.
It was further informed that in another action Rangers arrested two accused from Gizri and Coastal area. The accused were allegedly involved in street crimes.
They were identified as Haider Abbas alias Shams and Ali Raza Zaidi.
Later, the accused were handed over to the Police for further legal action. – APP