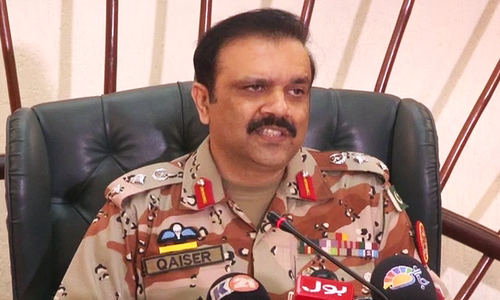 KARACHI: Sindh Rangers Spokesman Colonel Qaiser said on Wednesday that two suspects from Muttahida Quami Movement-London have been caught who were behind the killing of two people on July 17 in Orangi Town.
The Rangers spokesman was addressing a press conference, where he also played the audio recording of the MQM founder.
“MQM founder praised those who killed the two people,” he said.
He said that the suspects were getting financing from South Africa and they received a message on WhatsApp to carry out the killings.
The suspects received Rs50,000 in their accounts, said Rangers Sindh spokesman.
Col Qaiser said that the suspects after being arrested also revealed the names of their accomplices. They named MQM founder, Nadeem Nusrat, Qamar Daddy, and Babu Bhai.
The suspects have been identified as Muhammad Raheem and Muhammad Danish, he said, adding that ammunition has been recovered from the suspects as well.