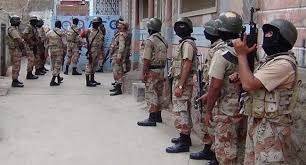 KARACHI: Rangers recovered a huge cache of weapons buried underground in Lyari, spokesman for the paramilitary force said on Friday.
Giving details of the weapons recovered by the paramilitary force, the spokesman said one LMG, six SMGs, three Zero-Three rifles, three 7mm rifles, two 44 bore rifles, five 12 bore Pump action and nine 30 bore pistols were recovered.
The spokesman added that the weapons recovered were likely to be used for target killings and violence in the city.