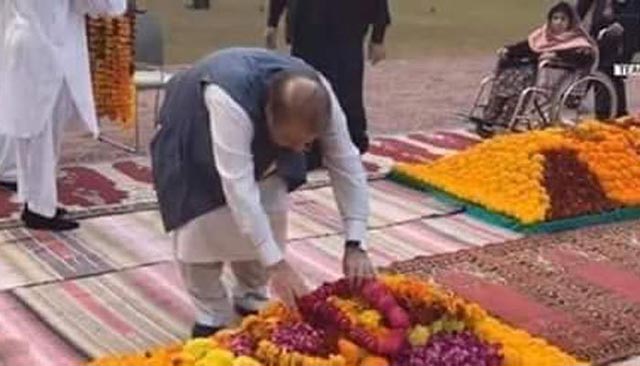 LAHORE: Prayers for the departed former first lady Begum Kulsoom Nawaz were held at Jati Umra on Sunday (today).
Pakistan Muslim League-Nawaz President Shehbaz Sharif, who is the brother-in-law of Kulsoom Nawaz, had said the prayers would be attended by family members only.
Earlier, Shehbaz requested his party’s sympathisers and the public to pray and arrange Quran Khwani for Kulsoom Nawaz in their respective areas. He clarified that the participation of only family members in the Rasm-e-Qul was aimed at saving people and sympathisers from any difficulties and distress.
Kulsoom Nawaz, wife of former prime minister Nawaz Sharif, was laid to rest on September 14. She passed away in London on September 11 after a year-long battle with cancer. Her funeral prayers were offered in London on Thursday following which Kulsoom Nawaz’s body was flown to Lahore.
Nawaz, daughter Maryam Nawaz and Captain (retd) Mohammad Safdar were released on parole to attend the final rites of the departed soul.
They had been sentenced to jail by an accountability court weeks before the July 25 polls in the Avenfield property reference.