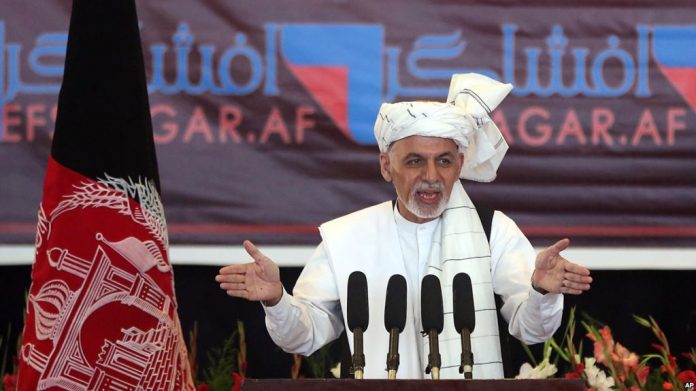 KABUL: President Ashraf Ghani officially opened the second Kabul Process meeting in the Afghan capital on Wednesday and said peace needs to be sought with the Taliban in order for them to become a political group.
Ghani said the peace process, and a ceasefire must be agreed upon with the Taliban.
“The Afghan government must be accepting and we will also work on the list of freeing Taliban prisoners”, he said.
Ghani also called on Pakistan to hold talks government to government and said: “We will be ready to starts talks with Pakistan and forget the past and start a new chapter.”
Ghani sent a strong message to the Taliban however, and said today peace is in their hands. He called on the group to accept the offer and to join the peace process and together with Afghanistan “save the country”.
Ghani also announced the Afghan government will provide passports to Taliban members and their families and will issue visas, open an office for them – even in Kabul – and will also work to remove sanctions against Taliban leaders.
Earlier in his speech Ghani said Afghanistan is determined to overcome the current threats and expand shared interests and grasp opportunities.
Ghani thanked delegates from all the countries in attendance for their support over peace in Afghanistan and said the threats are increasing and the enemies of Afghanistan are transnational criminals.
He went on to say the Afghan government and the international community have analyzed the scale and scope of the threat and drafted numerous resolutions and agreements to address the threat, but consensus is still needed to take coordinated action among states to counter the threat.
He told delegates: “Your presence here is a visible reminder that we are an international community united not only by shared threats, but shared interests and shared opportunities.”
Ghani also thanked India and Iran for their cooperation in the transit sector for Afghanistan.
Ghani thanked Turkmenistan, Uzbekistan, Turkey and other countries who are cooperating in economic projects with Afghanistan. “Our economic cooperation with Russia and China is also increasing,” he said.
The president said Afghanistan’s sense of justice is derived from its Islamic faith, culture and civilization. As a 99.9% Muslim country, faith has always united Afghans in the face of adversities and allowed the countrymen to overcome the seemingly impossible.
He stated that every Afghan, regardless of their ethnicity, is equal among Afghans and this sense of equality is rooted in the country’s past, as every major city has served as a capital of an empire or a state through history.
Ghani said Afghanistan has never threatened any country and has also not let anyone use its soil to threaten another country.
He also said that contrary to the image portrayed of a land of “endless conflict”, Afghanistan’s history is one of long periods of peace and prosperity, punctuated by foreign invasions and subsequent rebuilding.
He also stated that Afghanistan plays an important role in Asia. Over 2,500 years of history and archeology shows that the country functioned not merely as a crossroad of civilizations but as a cross-road civilization.
The Kabul Process meeting on mapping out a plan for peace in Afghanistan started in Kabul on Wednesday and is being attended by representatives from 25 countries and organizations including the UN and NATO. – Agencies