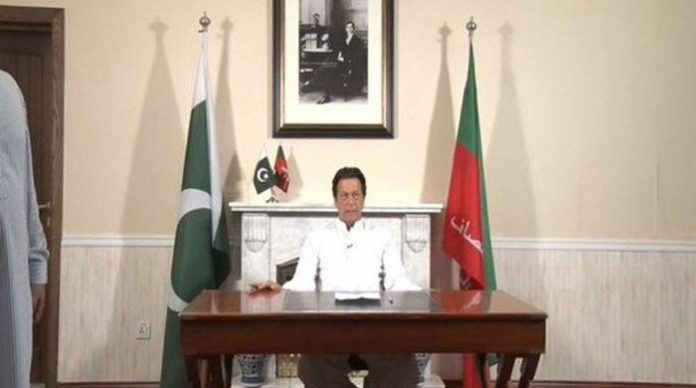 ISLAMABAD: Pakistan Tehrik-e-Insaf (PTI) chairman Imran Khan asked all the opponents leveling rigging allegations that his party is ready to investigate all constituencies where rigging allegations have been raised.
Imran Khan while addressing a press conference, thanked the nation for stepping out to vote in the July 25 polls. He assured all opponents that his government will help in investigating rigging during the July 25 General Elections.
Imran Khan asked the whole nation to get united to resolve problems and issues being faced by Pakistan.
Talking about situation in Afghanistan, Imran Khan said that his government will extend every possible support to restore durable peace in the war torn Afghanistan. He said that stable and peaceful Afghanistan is in the longstanding interests of Pakistan and the sub-continent.
Imran Khan stressed on coordination with US who is involved in Afghanistan to ensure restoration in Afghanistan.
Imran also stressed that he wants to improve relations with Afghanistan and that his government will strive to ensure peace in the neighbouring country.
Regarding relations with the US, the PTI chief said, “We want mutually beneficial relations with the US.”
Speaking about India, Imran said he felt disappointed over the Indian media’s coverage of his electoral campaign. “I felt like I was a Bollywood villain,” he said.
He continued, “If Indian government is ready for improved relations with us then so are we. If they take one step towards us we will take two, but they need to take that one step.”
Imran further said dialogue is the only way forward with India and to ensure a peaceful South Asia.
“I want to commend the armed forces,” he said adding that some soldier lost their lives during polling duty.
“I want to tell the nation about the kind of Pakistan I want to see,” he said. The PTI chief continued, “I came into politics because I wanted Pakistan to become the country that Jinnah had envisioned. This has been a historic election. I especially want to thank the people of Balochistan who despite terrorism came out in huge numbers to vote.”
“We are witnessing the strengthening of democracy in Pakistan. The election process was completed successfully despite many terror attacks,” he added.
The cricketer-turned-politician who began his political struggle 22 years ago added, “God has given me the chance to make my dream come true.”
“All my policies will focus on strengthening the weak,” he asserted.
The PTI chief, whose party was in power in KP but has never got a stint at premiership, maintained that he wants to make Pakistan a welfare state.
“I vow that my government will be the first that does not engage in political victimisation,” he upheld.
Imran added that accountability will begin from him and his ministers in his mission to battle the scourge of terrorism in the country. “We will make an example and show to the nation that accountability needs to be across the board.”
The PTI chairman further pledged to safeguard the tax money of citizens.
“PM House might be turned into an educational institute and governor houses may be used to boost tourism,” he said.
“We want to improve our relations with neighbouring countries,” he said especially mentioning China.
“CPEC is crucial and we want to learn poverty alleviation from China,” he said.