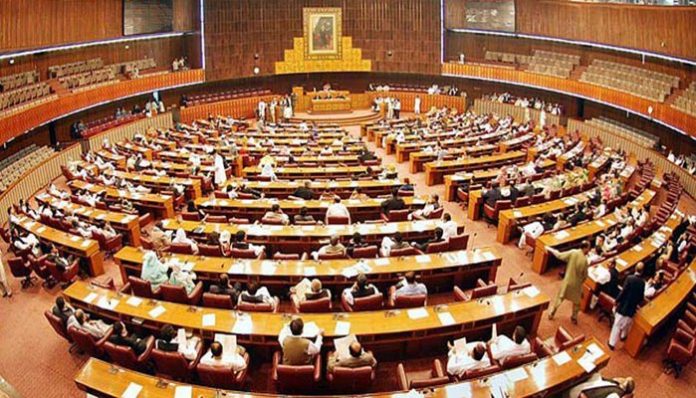 ISLAMABAD: Following the opposition’s protest in the joint session of the parliament on Tuesday, an amended resolution was presented against the scrapping the special status of Indian occupied Kashmir (IoK).
A joint session of Parliament began at Parliament House earlier today to discuss the deteriorating situation in Indian-occupied Kashmir, after the Indian government revoked Article 370 of the constitution which granted special status to the disputed valley.
The session started with Federal Minister for Parliamentary Affairs Azam Khan Swati moving a resolution condemning Indian actions in the occupied valley. 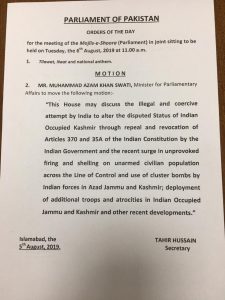 The session had to be adjourned for 20 minutes after the opposition insisted on including a clause pertaining to amendment in Article 370 in the session’s agenda.
Following the ruckus by the opposition, Senator Swati presented the amended resolution before the House, which mentioned Article 370.
The joint parliamentary session, summoned by President Dr Arif Alvi, was to review the tense situation in occupied Kashmir and along the Line of Control after the Modi government rushed through a presidential decree on Monday to abolish Article 370, which revoked the special status granted to occupied Kashmir and made the state a Union Territory with the legislature.
Prime Minister of Azad Jammu and Kashmir Raja Farooq Haider was among the leaders present in today’s session, which was chaired by National Assembly Speaker Asad Qaiser. Science and Technology Minister Fawad Chaudhry, Railways Minister Sheikh Rasheed, Human Rights Minister Shireen Mazari and Leader of the Opposition in the National Assembly Shehbaz Sharif are among the MNAs and senators in attendance.
The opposition refused to hear policy briefing from Human Rights Minister Shireen Mazari, demanding that PM Imran and Foreign Minister Shah Mehmood Qureshi should address the House.
The opposition members also demanded that the production orders for their key leaders should be issued, so they can also attend the joint session.
The agenda for today’s session stated, “This House may discuss the illegal and coercive attempt by India to alter the disputed Status of Indian Occupied Kashmir through repeal and revocation of Articles 370 and 35A of the Indian Constitution by the Indian Government and the recent surge in unprovoked firing and shelling on unarmed civilian population across the Line of Control and use of cluster bombs by Indian forces in Azad Jammu and Kashmir; deployment of additional troops and atrocities in Indian Occupied Jammu and Kashmir and other recent developments.”