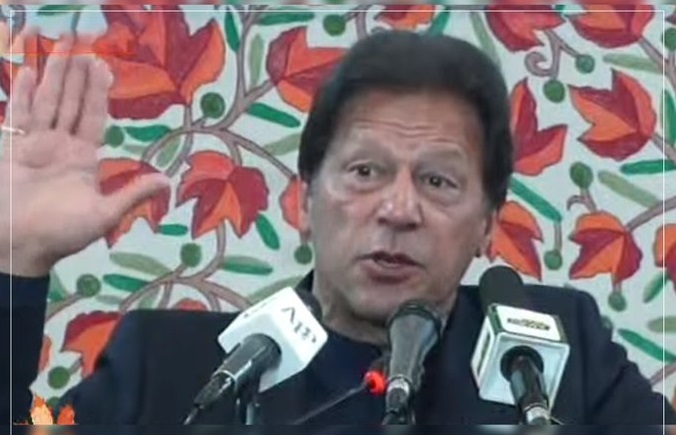 MUZAFFARABAD: Prime Minister Imran Khan on Wednesday said India’s move to revoke the special status of occupied Kashmir was a ‘fatal’ move by Narendra Modi government which will lead to its independence.
“I believe due to this action by Modi on August, Kashmir would be made independent,” PM Imran said while addressing a special session of the Azad Jammu and Kashmir (AJK) Legislative Assembly. “Before August 5 the world did not care or listen about the injustice in Kashmir.”

Also read: President, PM reiterate Pakistan’s unflinching support for Kashmir
“August 5 was a fatal mistake and Modi cannot back down now. He did this because he got a big mandate in the elections. He campaigned against Pakistan and brought the Hindutva philosophy and teach a lesson to Pakistan,” the prime minister said.
PM Imran continued, “He [Modi] brought RSS’s philosophy up. RSS is an organisation inspired by Hitler and Nazis. The RSS admires Aryan race theory and the RSS founding father have lauded the Nazi’s in their books. They used to think they could ethnically cleanse Muslims.”
“Before India’s move in August last year, this was all hidden. For the first time, we told the world the RSS philosophy in UNGA. I had promised you that I will become a messenger of Kashmir I put forward before the world of RSS philosophy and what was happening.”
The prime minister continued, “Wherever I went and the forum I went to, I told them what was happening in Kashmir. At UNGA, at the refugee conference in Geneva, I raised the issue of Kashmir.”
I told US President Donald Trump thrice what was the Kashmir issue, the prime minister remarked. “I know how the west works and what affects them. “I know how the west gets affected and any philosophy equated with Nazis cannot be ignored,” PM Imran said. “They know what is Nazi philosophy.”
The prime minister further said that the RSS ideology is a threat to India as well. “This philosophy would have worked had there been a minority. But those affected by the philosophy are 20 crore Muslims. Whenever you build a philosophy on hate it leads to bloodshed.”
“I tell my people not to be disappointed as it is a difficult time, but the Kashmiris are facing a difficult time as well. Our delegations should go to different forums. Modi has unleashed the monster of Hindutva and he cannot go back now. If he goes forward now he will start facing resistance. Hindutva nationalism will affect everyone now,” PM Imran said.
The prime minister arrived in Muzaffarabad earlier to address the special session of AJK Legislative Assembly to express solidarity with the oppressed people of Occupied Jammu and Kashmir.
Upon his arrival at the helipad, AJK President Sardar Masood Khan, Prime Minister Raja Farooq Haider Khan, Speaker Legislative Assembly Shah Ghulam Qadir and other high-ranking officials accorded a warm welcome to him.
Later, the prime minister was given a guard of honour by a smartly turned-out contingent of AJK Police at his arrival at AJK Legislative Assembly.
The national anthem of Pakistan was also played on this occasion.