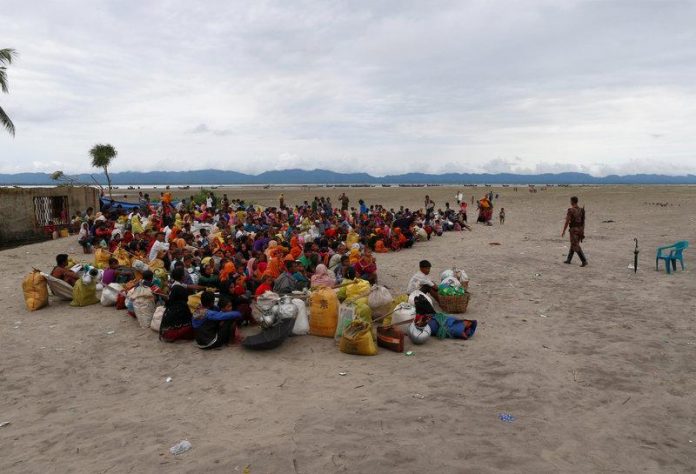 COX‘S BAZAR, Bangladesh: Rohingya Muslims in Bangladesh were skeptical on Tuesday about their chances of ever going home to Myanmar, even though the government there has given an assurance it would accept people verified as refugees.
More than half a million Rohingya have fled from a Myanmar military crackdown in Rakhine State launched in late August that has been denounced by the United Nations as ethnic cleansing and placed a huge burden on Bangladesh.
Myanmar denies ethnic cleansing, saying it is only fighting Rohingya terrorists who have claimed attacks on the security forces. The government has said anyone verified as a refugee from Myanmar will be allowed to return under a process agreed with Bangladesh in 1993.
Bangladesh and Myanmar agreed on Monday to work on a repatriation plan, and a Myanmar government spokesman confirmed it would go along with process, provided people could verify their status with paperwork.
“Everything was burned, even people were burned,” said a refugee who identified himself as Abdullah, dismissing the chances that people would have documents to prove a right to stay in Myanmar.
At the root of the problem is the refusal by Buddhist-majority Myanmar to grant citizenship to members of a Muslim minority seen by a mostly unsympathetic, if not hostile, society as interlopers from Bangladesh.
Though Myanmar has not granted Rohingya citizenship, under the 1993 procedure, it agreed to take back people who could prove they had been Myanmar residents.
But a day after Bangladesh and Myanmar announced apparent progress, a Bangladeshi foreign ministry official appeared resigned to a difficult process.
“This is still a long procedure,” said the official, who declined to be identified as he was not authorized to speak to media.
There were already about 300,000 Rohingya refugees in Bangladesh before the latest exodus, but Myanmar had said it would only take back those who arrived after October 2016 – when a military offensive in response to Rohingya insurgent attacks sent 87,000 Rohingya fleeing to Bangladesh – “subject to verification”, the official said.
“We said that many Rohingya refugees have no documents, so this process should be flexible. Myanmar said they will decide who will get involved in the verification,” the official said, adding Bangladesh wanted international agencies to be involved.
Myanmar’s government spokesman said under the 1993 pact, even a hospital record was enough to prove residency, but it was only Myanmar, and not Bangladesh, that could verify citizenship.
“We have a policy for the repatriation process and we will go along with that policy,” the spokesman, Zaw Htay, told Reuters.
But even if refugees had documents, many are wary about returning without an assurance of full citizenship, which they fear could leave them vulnerable to the persecution and curbs they have endured for years.
Amina Katu, 60, laughed at the thought of returning.
“If we go there, we’ll just have to come back here,” she said. “If they give us our rights, we will go, but people did this before and they had to return.”
Last month, Anwar Begum told Reuters she had now fled from Myanmar three times. The first time was to escape a 1978 crackdown, and she returned the following year. She fled again in 1991 and returned in 1994.
“I don’t want to go back,” the 55-year-old added. “I don’t believe the government. Every time the government agrees we can go back, then we’re there and they break their promise.”
Investigators appointed by Suu Kyi and led by former U.N. secretary-general Kofi Annan recommended in August that Myanmar review a 1982 law that links citizenship and ethnicity and leaves most Rohingya stateless.
Statelessness was at the root of the problem, U.N. High Commissioner for Refugees Filippo Grandi told a meeting in Geneva on Monday.
“Nowhere is the link between statelessness and displacement more evident than with the Rohingya community of Myanmar, for whom denial of citizenship is a key aspect of the discrimination and exclusion that have shaped their plight,” he said.
Grandi also called for a two-track approach to tackle issues of citizenship and rights and inclusive development to stamp out poverty in Rakhine State. – Reuters