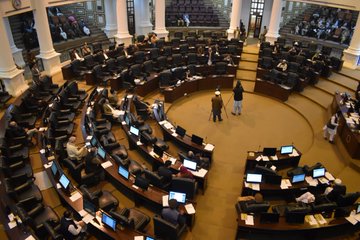 PESHAWAR: Khyber Pakhtunkhwa (KP) Assembly on Tuesday witnessed physical brawl between the treasury and opposition members after the latter tried to surround the speaker’s dice.
According to reports, the members from both sides of the aisle gathered before Speaker Mushtaq Ahmed Ghani and exchanged heated arguments.
Soon it turned into a physical fight after an opposition lawmaker hailing from Awami National Party, Ahmed Khan Bahadur, attacked Pakistan Tehreek-Insaf (PTI) legislator Fazal Hakeem Khan.
The lawmakers from both sides however, intervened to separate them from each other. During the ruckus in the house, opposition lawmaker Nighat Orakzai also climbed her assembly seat. She was also involved in sitting on the speaker’s seat during an earlier protest in the house.
The ruckus forced the speaker to adjourn the assembly proceedings for a time being and later when he returned to his seat he was given a standing welcome from the treasury lawmakers for handling the situation in a better way.
The speaker warned the provincial lawmakers from opposition parties over their behaviour and said that he was neglecting that for the last time. The house proceedings were later adjourned for Friday.