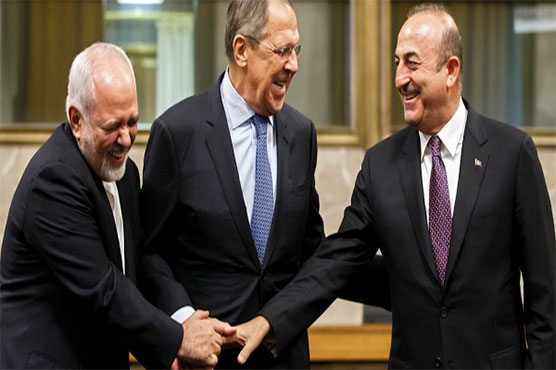 GENEVA: Russia, Turkey, Iran and the United Nations voiced hope Tuesday that a committee charged with writing a new Syrian constitution will start work early next year.
The Damascus government, which is backed by Moscow and Tehran, has not yet agreed to the committee, saying it will only support a process that alters Syria s existing constitution.
Russian Foreign Minister Sergei Lavrov — flanked by his Iranian counterpart Mohammad Javad Zarif and Turkey s Mevlut Cavusoglu — read a joint declaration after talks with UN Syria envoy Staffan de Mistura.
Russia, Iran and opposition backer Turkey “agreed to take efforts aimed at convening the first session of the Constitutional Committee in Geneva early next year,” Lavrov said.
The committee has become the centrepiece of UN peace efforts in Syria and aims to set up elections that can turn the page on seven years of devastating war.
De Mistura, who will be replaced as UN envoy on January 7, praised the “significant joint input” from the three powers.
But the United States, which has tense relations with Russia and Iran, recalled that the initial goal had been to set up the body within 2018.
“The establishment and convening by the end of the year of a credible and balanced constitutional committee in Geneva is an important step to lasting de-escalation and a political solution to this conflict,” State Department spokesman Robert Palladino said in Washington.
The meeting marked a final moment in de Mistura s four-year tenure, which did not produce a breakthrough for peace.
An op-ed in Syria s pro-government Al-Watan newspaper on Tuesday underscored de Mistura s tense relationship with Syrian President Bashar al-Assad s regime.
“In Damascus, we will never be sorry for Staffan de Mistura s departure,” Al-Watan said.
De Mistura is “leaving with regret that he couldn t destroy the Syrian state and couldn t impose the West s agenda on Syrians,” it continued, while chastising efforts to “impose a new constitution on Syrians.”
The veteran UN diplomat tried to put a positive spin on his fraught peace push by suggesting that protracted rounds of diplomacy helped limit bloodshed in Syria.
De Mistura said he had been contacted by an individual, whom he did not identify, who had conducted “various extrapolations” which indicated that UN-backed talks had saved hundreds of thousands of lives.
“The fact that you have been coming up constantly with your team with new meetings, preparatory meetings, inter-discussions, ceasefires that didn t work and then worked and didn t work again… we have been calculating that instead of 540,000 people (dead) there would have been 1.3 million,” de Mistura told reporters, quoting the unnamed individual.
A UN spokesperson later told AFP that de Mistura was citing an estimated death toll of 540,000 people for Syria that includes combatants.
The Syrian Observatory for Human Rights, a monitor group, has said that an estimated 360,000 people have been killed in the conflict. …Agencies