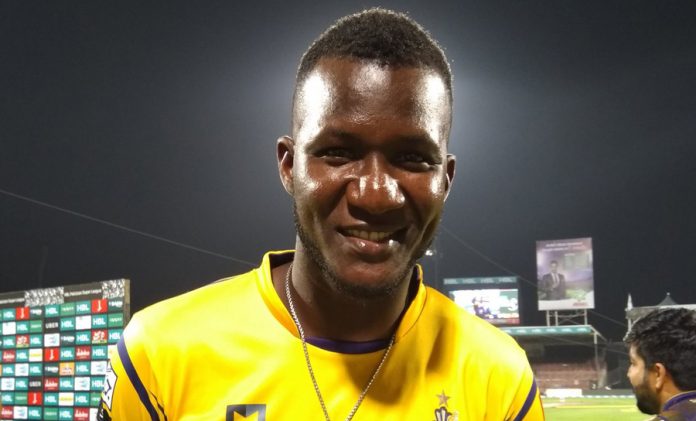 KARACHI: Peshawar Zalmi skipper Darren Sammy on Saturday requested the Pashtuns to show their support to his team by donning yellow shirts in the Pakistan Super League final tomorrow.
Speaking in a press conference ahead of the final against JP Duminy-led Islamabad United, Sammy said: “I have been told that there are a lot of Pakhtuns here, I want them to come up dress in yellow and show their support. In the end of the day cricket is the winner, so far the city has been great. Lahore has been great, I challenge Karachi to be even greater.”
The West Indian all-rounder said that his visit to Peshawar is ‘on cards’. “It’s a place I will visit soon,” he said.
Sammy in a message to the West Indian team, which is expected to visit Pakistan to play three t20s in Karachi, said: “My message is that it’s a great place to play. All the best. Its good to see international cricket in Karachi. Hopefully, it’s a great series. The fans are entertained,” he added.
Responding to a question, the Zalmi skipper called opener Kamran Akmal as ‘his champion’ and said “Kamran Akmal is in red-hot form too, and they (Islamabad United) should be planning to stop my champion.”
“We have our plans ready for Ronchi, hopefully, we will execute them,” he added. “But I cant tell you what our plans are.”
Sammy refuted the impression that he has successfully replaced Shahid Khan Afridi as a brand for Zalmi.
“We call each other brothers. Without him, I wouldn’t be where I am in this team today. Even though he is not playing for us but for first two seasons, he played a big part,. He made Peshawar a brand what it is today,” he added.
“Last year he handed over the captaincy, he gave me captaincy when I was stripped of the captaincy in international – that was big on his part., He will always be peoples’ champions, he will always be Pakistan’s favourite sportsman. There is no way ever anyone takes over Afridi’s support in Pakistan.”