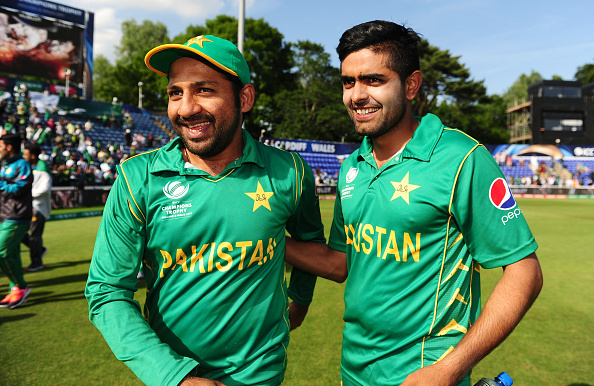 KARACHI: The Pakistan Cricket Board (PCB) said Friday it was retaining Sarfaraz Ahmed as the captain of the Pakistani team, whereas Babar Azam was named the vice-captain for the upcoming Sri Lanka series.
The series, wherein Sarfaraz will lead Pakistan, comprises three one-day international (ODI) and three Twenty20 international (T20I) matches against Sri Lanka and is slated to be held from September 27 to October 9.
PCB chairperson Ehsan Mani confirmed the appointments, the cricket regulatory authority said in a press release issued Friday. The decisions were made “following recommendations made by Pakistan head coach and chief selector Misbah-ul-Haq and the PCB Cricket Committee”.
In this regard, Sarfaraz said he was “humbled and honoured” for the extension and added: “I have enjoyed captaining the Pakistan cricket team and look forward to improve my leadership qualities under the new set-up of Misbah-ul-Haq who also has a proven record as captain.”
Terming Sarfaraz “an experienced campaigner”, Mani, the PCB chair, said the captain “has excelled and improved as a leader with every match”.
He noted: “I have complete faith in his abilities and I am confident he will continue to blossom under Misbah’s wings. We have appointed Babar Azam as Sarfaraz’s vice-captain. This is part of Babar’s gradual development as a future captain and in line with our strategy of introducing a succession plan across the board so that there are no gaps.
“I am hopeful the trio of Misbah, Sarfaraz and Babar will do well for Pakistan cricket,” he added.
Misbah-ul-Haq, on the other hand, congratulated Sarfaraz and Babar on their appointments, saying: “Both are one of the most talented and exceptionally gifted Pakistan cricketers and thoroughly deserve these assignments.
“Consistency backed up by good performance has been my yardstick for recommending Sarfaraz as captain. Furthermore, I think I am better placed to get the best out of Sarfaraz as I know him better than most of the cricketers as he has played most of his cricket under my captaincy.
“I have always been an admirer of his commitment and the energy he brings to the side.
“I have emphasised on changing the dressing room culture and mind-set of the players to achieve better results, and I believe Sarfaraz is a perfect fit to help me attain these objectives.
“In the past couple of weeks, Sarfaraz and I have worked together on certain areas of his cricket that will enhance his overall performance. Both of us realise it is a performance-oriented world and we are expected to give our best every time we take the field.
“I look forward to working with him and hope we will succeed in changing the outlook of the Pakistan cricket team,” he noted.
Squad and training
Separately, 19 players likely to be added to the team for the Sri Lanka series would be announced on Monday. The training camp, on the other hand, “will commence at the National Cricket Academy from Wednesday, 18 September”, the PCB said.
It added: “The 16-player ODI and T20I squads will be named on Monday, 23 September.”
Sarfaraz was appointed as the captain of the Pakistan team for the T20Is in April 2016 before being promoted as the ODI captain in early 2017. Subsequently, he was named captain across all formats.
He has has captained the Pakistan team in 13 Test, 48 ODI, and 34 T20I matches, winning four, 26, and 29 matches, respectively.
However, Babar Azam — ranked 16th in Tests, third in ODIs, and No. 1 in T20Is — captained Pakistan earlier in the ICC U19 Cricket World Cup 2012.
Babar also featured in the ICC U19 Cricket World Cup 2010 before entering the international cricket scene in 2015 and has since regularly featured in all formats.