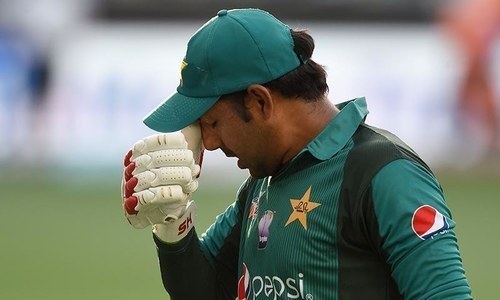 CAPE TOWN: Pakistan captain Sarfraz Ahmed on Wednesday tendered an apology for his offensive comments caught by broadcast stump mics during yesterday’s match against South Africa.
The Pakistan captain was taken to task by fans who described his words against South African all-rounder Andile Phehlukwayo as racial slur.
Taking to Twitter on Wednesday, Sarfaraz said that his words were not directed towards anyone.
“I wish to extend my sincere apologies to any person who may have taken offence from my expression of frustration which was unfortunately caught by the stump mic during yesterday’s game against SA,” he wrote.
“My words were not directed towards anyone in particular and I certainly had no intention of upsetting anyone. I did not even mean for my words to be heard, understood or communicated to the opposing team or the cricket fans,” he said.
“I have in the past and will continue in future to appreciate the camaraderie of my fellow cricketers from across the globe and will always respect and honour them on and off the field.”
A video making rounds on social media clearly indicates the statement he allegedly passed in Urdu language against Andile Phehlukwayo.
Sarfraz said to Phehlukwayo, “Abey Kaaley, Teri Ammi aaj kaha baithi huyeen hain, Hain??? Kya parhwa ke aya hai aaj tu?”
The sledge translates roughly to: “Hey black [man], where is your mother sitting? What [kind of prayer] did you ask her to say for you today?”
Sarfraz is in danger of facing sanctions from the International Cricket Council (ICC) as the match officials can initiate disciplinary action, which may fall under the ambit of the their anti-racism code.
According to the “ICC Anti-Racism Policy for International Cricket- 1 October 2012”, The ICC and all of its Members should “not at any time offend, insult, humiliate, intimidate, threaten, disparage, vilify or unlawfully discriminate between persons based on their race, religion, culture, colour, descent, and/or national or ethnic origin (inappropriate racist conduct).”