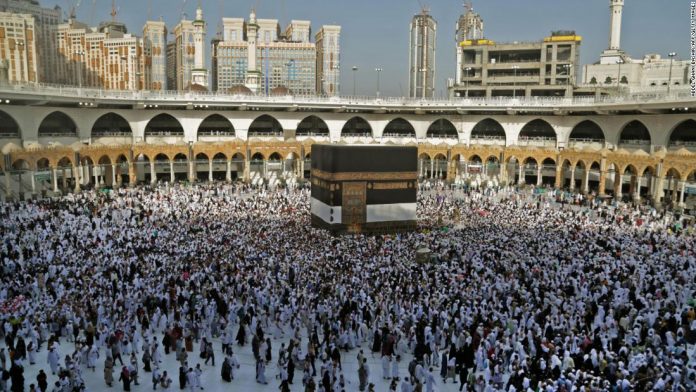 RIYADH: Saudi Arabia, for the first time in modern history, is considering cancelling Hajj after the kingdom’s cases went past 100,000, Financial Times reported.
“The issue has been carefully studied and different scenarios are being considered. An official decision will be made within one week,” a senior official from Saudi Arabia’s Hajj and Umrah ministry told the Financial Times.
The annual pilgrimage to be observed in late July is the largest gathering of Muslims in the world with as many as 2 million pilgrims congregating every year.
Earlier, it was reported that Saudi Arabia is considering reducing the number of people allowed to observe the pilgrimage.
The kingdom asked Muslims in March to put Hajj plans on hold and suspended Umrah until further notice.
Two sources familiar with the matter later said authorities are considering allowing “only symbolic numbers” this year, with restrictions including a ban on older pilgrims and additional health checks.
“All options are on the table but the priority is for the health and safety of pilgrims,” the official said.
Saudi Arabia has successfully organised Hajj during previous outbreaks of viral illnesses such as Ebola and MERS. However, the scale of the coronavirus pandemic poses a greater challenge to overcome.
It enforced safety measures early on. The first case was confirmed on March 2, after which the kingdom swiftly put restrictions on travel and imposed a two-month nationwide curfew.
Subsequently, the lockdown was eased in May, after which a surge in cases and deaths was witnessed.
As of Saturday, the coronavirus cases in the kingdom have crossed 123,000 and deaths have shot past 900.
Muslim countries every year apply for a quota, seeking to have more pilgrims from their country allowed to go for Hajj.
Indonesia, which has the largest Muslim population, usually gets the lion’s share with around 200,000 faithful undertaking the pilgrimage. But this year the country has announced none of its citizens will go.
“In May, we prepared two options: a 50 per cent quota reduction or cancellation. [But] Saudi Arabia has not opened access to hajj pilgrims from any country to date,” Fachrul Razi, Indonesia’s religious affairs minister, told local media earlier this month. “As a result, the government doesn’t have enough time to make primary preparations for services and protection of pilgrims.”
Malaysia said on Thursday it would also not send pilgrims this year.
Saudi Arabia had ambitious tourism plans before the coronavirus outbreak. The kingdom had sought to double the Umrah pilgrims to 15 million by the end of 2020.
The Umrah and Hajj pilgrims combined were expected to add $12bn to the country’s wealth this year.
“The probable loss of most of that revenue will put more pressure on an economy that has already been hit by the twin shocks of the oil price collapse and the pandemic. Hotels and religious tourism operators in the holy cities of Makkah and Madina will be particularly affected,” noted Financial Times.
An international ban imposed on May 20 is in place and will need to be lifted if Saudi Arabia does decide to go ahead with Hajj.
According to a report by the Riyadh-based King Abdulaziz Foundation for Research and Archives, Hajj has only been known to have disrupted on 40 different occasions in history, all before modern Saudi Arabia came into being in 1932.
Yasmine Farouk, a visiting scholar at the Middle East Program of Carnegie Endowment for International Peace, said that whatever decision is made will have political and economic consequences for Saudi Arabia and internationally as well.
“If they go ahead with Hajj while the current COVID-19 situation doesn’t improve, they might incur unprecedented pressure on their health system, international criticism and maybe even demands for compensation,” Ms Farouk said. “If they decide against Hajj, the economy — especially local economies of Makkah and Madina — will suffer.” …Agencies