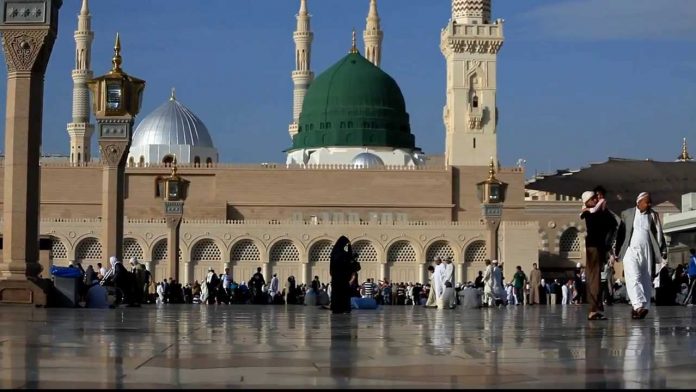 MADINA: Saudi Arabia’s King Salman bin Abdulaziz approved opening the Prophet’s Mosque in Madina to the public starting from Sunday, May 31, as part of the government’s plan to ease coronavirus restrictions and re-open the Kingdom.
The General Presidency for the Affairs of the Two Holy Mosques has completed the plan to reopen the Prophet’s Mosque under strict precautionary measures, limiting the congregation to 40 percent of the mosque’s capacity at a time.
The worshipers will be allowed to enter the mosque from Fajr prayers on Sunday morning (Shawwal 8).
Prayer rugs spread in the Prophet’s Mosque will be removed from the courtyards.
The authority also issued COVID-19 safety guidelines for praying in mosques: worshippers should wear face masks, worshipers should practice social distancing while praying with others in congregational prayers and worshippers should bring their own prayer mats to pray on.
The Kingdom had announced on Tuesday the details of its phased plan to ease coronavirus restrictions and eventually restore “normal” conditions.
It started implementing the first phase on Thursday, by shortening curfew and allowing for some economic activities to resume operations.
The second phase, which starts on Sunday, includes reduced curfew hours and allowing Friday prayers and all congregational daily prayers in all mosques across the Kingdom, except in Mecca.