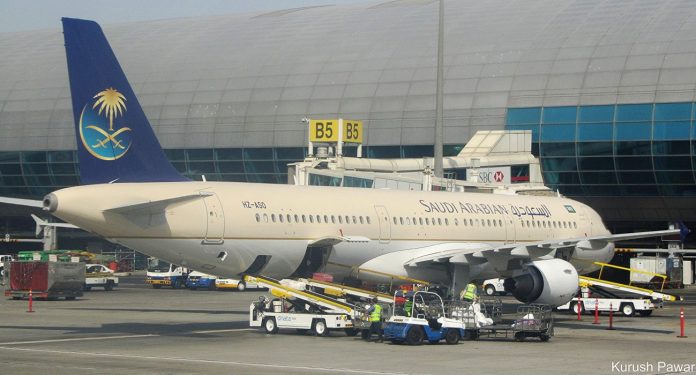 RIYADH: Saudi Arabia said Saturday it would suspend international flights for two weeks in response to the coronavirus outbreak.
“The Kingdom´s government decided to suspend international flights for two weeks (Starting from Sunday March 15th) as part of its efforts to prevent the spread of #CoronaVirus,” the foreign ministry tweeted.
Saudi Arabia has recorded 86 cases of the virus so far, but no deaths, according to the health ministry.
The Kingdom had already halted flights to some countries and closed schools and universities as part of measures to contain the disease.
The period will be considered as an exceptional official holiday for citizens and residents who are unable to return due to the suspension of flights or if they face quarantine after their return to the Kingdom, the Saudi Press Agency cited an official source at interior ministry.
Authorities have also suspended the “umrah” year-round pilgrimage to the Muslim holy cities of Mecca and Medina for fear of the virus spreading.
Saudi Arabia announces lockdown, directs tourists and pilgrims to leave within 72 hours
On Thursday, Saudi Arabia announced a temporary lockdown in the country, directing pilgrims and tourists to leave the country within the next 72 hours in a bid to contain the virus from spreading to various parts of the world.
The Pakistan International Arilines (PIA) had made emergency arrangements to bring Pakistanis in Saudi Arabia back to the country. The national flag bearer plans to use additional flights to bring Pakistanis back from Saudi Arabia.
Those Pakistanis who are either residents of Saudi Arabia or hold an Iqamah have been provided the choice to either return to the country within 72 hours if they desire. However, if they wish to leave, then they must do so in 72 hours.
A PIA spokesperson said that the schedule of the additional flights which would bring back Pakistanis from the kingdom will be announced soon.