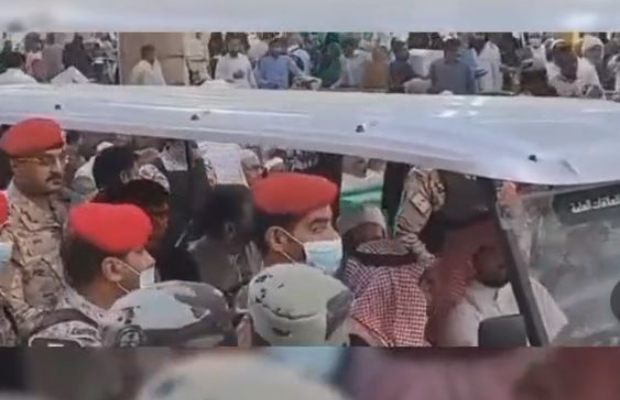 ISLAMABAD— The embassy of Saudi Arabia in Pakistan has confirmed the arrest of “some” Pakistani pilgrims, for disrespecting Majisd-e-Nabawi by shouting ‘chor chor’ slogans against delegation of Shehbaz Sharif,  who had arrived in Saudi Arabia on official visit on Thursday.

Demonstrations are illegal in Saudi Arabia but videos emerging on social media platforms showed the crowd around the delegation, shouting “chor, chor (thief)”. The Saudi embassy in Islamabad said that protesters were taken into custody by Saudi authorities for “violating the regulations” and “disrespecting” the sanctity of the holy mosque.

This is the first reaction from Saudi Arabia over the incident that has been widely condemned by Pakistanis across social media. Unconfirmed reports Thursday night claimed that between 2 and 150 people had been arrested, including a UK-based leader close to Imran Khan.

The Saudi embassy has not confirmed how many people were arrested nor did it identify them.

However, it said that the police action was still going on, hinting that more people could be arrested.

A group of Pakistani pilgrims shouted slogans and expletives on Thursday night as Marriyum Aurangzeb and Shahzain Bugti entered the mosque.

The ministers are part of the Pakistani delegation led by Prime Minister Shehbaz Sharif on a three-day official visit.

Prime Minister Shehbaz Sharif was in a shuttle cart with Saudi officials and was guarded by Saudi security officers.

Interior Minister Rana Sanaullah told a press conference in Islamabad on Friday that the sloganeering was a planned act and the planning was done in Pakistan.

After the incident on Thursday night, Prime Minister Shehbaz Sharif and his ministers returned to the mosque again.

“The delegation prayed for the security of the country and the nation and for the development and prosperity of Pakistan,” a statement from the Prime Minister Office said.