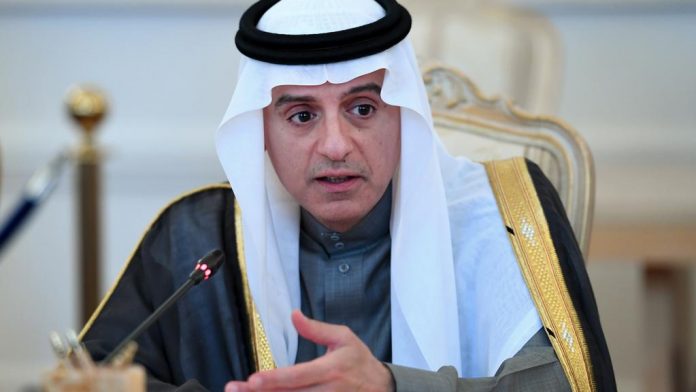 ISLAMABAD: Saudi Foreign Minister Adel Al-Jubeir will arrive in Islamabad today (Friday) to discuss the Pakistan-India situation.
He is coming on the directives of Saudi Crown Prince Mohammed Bin Salman to discuss the Pakistan-India situation. He will be bringing with him a special message from the crown prince.
He will meet Foreign Minister Shah Mahmood Qureshi to discuss the situation in the region.
Tensions between India and Pakistan have been tense since the February 14 Pulwama attack. The situation escalated when two Indian jets entered Pakistani airspace on February 26 and dropped a payload. India says it destroyed an alleged terrorist camp in the action while Pakistan says it did little more than damage some trees.
On February 27, Pakistan shot down two Indian fighter jets that entered Pakistani airspace in an attempt to intercept a PAF jet that had conducted action in India. One pilot was captured and the Pakistani premier announced on February 28 that he would be sent home today (Friday).
Pakistan has repeatedly called for India to deescalate the situation and come sit at the negotiation table instead of engaging in more aggression.
World leaders have called on Pakistan and India to defuse tensions and resolve their issues via talks. Turkey’s president praised PM Imran Khan for deciding to return the captured Indian pilot during a telephone call on February 28. The US president also said that he is hearing “reasonably decent” news from the two countries.