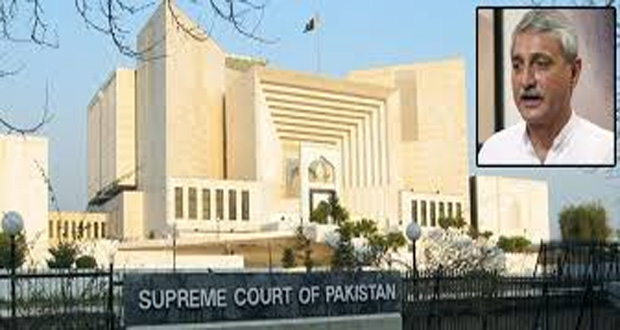 ISLAMABAD: The Supreme Court on Thursday rejected petition of Pakistan Tehreek-e-Insaf leader Jahangir Tareen’s against his disqualification.
A three-member bench of the apex court headed by Chief Justice of Pakistan Mian Saqib Nisar and comprising Justice Umar Ata Bandial and Justice Faisal Arab took up the review petitions of Pakistan Tehreek-i-Insaf’s leader Jahangir Tareen, who was disqualified on December 15 last year as well as of PML-N leader Hanif Abbasi, who sought to overturn the judgement exonerating PTI chief Imran Khan from all corruption charges.
The apex court had disqualified the PTI leader for not being honest in declaring his property in the United Kingdom.
In his review petition filed in the Supreme Court, PTI leader Jahangir Tareen had contended that he could not present legal instruments and specific documents regarding his trust Shiny View Limited (SVL) and his property Hyde House in the earlier round of litigation because these were not in his personal knowledge, possession or control.
On Dec 15, 2017, the Supreme Court had absolved Imran Khan of all allegations of corruption but disqualified Mr Tareen for mis-declaration under Article 62(1)(f) of the Constitution–the same provision under which former prime minister Nawaz Sharif was held ineligible to hold any public office for life in the Panama Papers leaks case.