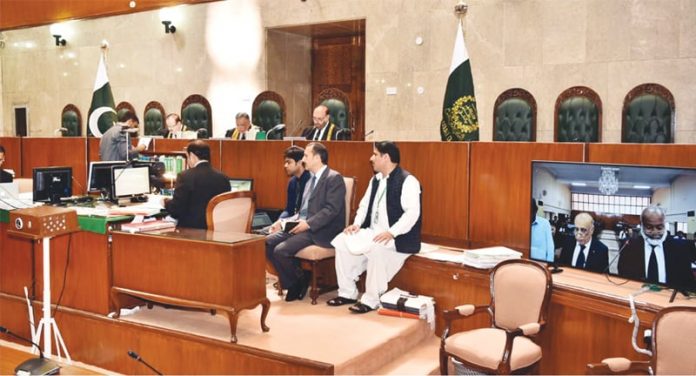 ISLAMABAD: The Supreme Court of Pakistan Quetta registry issued verdict in the first case heard through video link on Monday.
The SC Quetta registry’s case was heard via video link in Islamabad under the apex court’s judicial bench headed by Chief Justice of Pakistan Asif Khosa.
In the hearing, a suspect named Mushtaq Hussain’s two-year sentence was declared null and void.
During the hearing, the CJP remarked that it was his wish that the hearing of cases had begun from Quetta but due to technical reasons the e-court started working from Karachi registry.
CJP Khosa said that after a while one special bench will hear cases especially from video link, adding that they are grateful to National Database & Registration Authority (NADRA) for assistance.
The hearing of cases through e-courts will save money and time of the public, said the CJP.
For the first time in the history of the country, the Supreme Court of Pakistan began hearing cases through video link from May 27.
Utilising the system, lawyers presented their arguments from SC Karachi registry through video link.
Initially, the e-court system was available at SC Islamabad and Karachi registry.