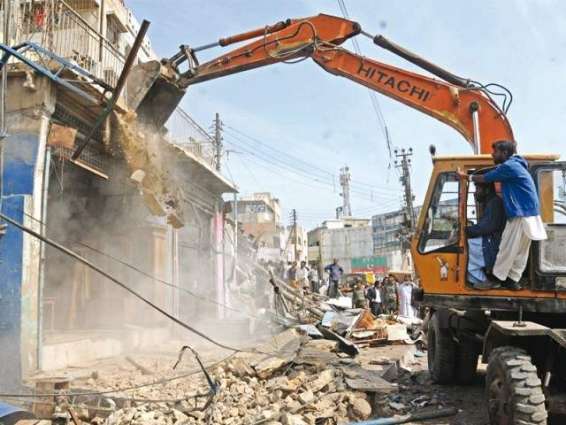 KARACHI: Supreme Court of Pakistan on Wednesday ordered for the continuation of the anti-encroachment drive in Karachi.
The Supreme Court has directed the pertaining authorities to carry on with the drive and not think about halting it anytime soon.
The decision was given after a report was presented before the court today over the procedures and progress of the drive in the Metropolitan city. The detailed report was presented by the Federal and Provincial Government.
Supreme Court Karachi Registry has commanded the Sindh High Court (SHC) to solve all cases within 15 days on the preferential basis.Chief Justice of Pakistan, Mian Saqib Nisar while hearing the case said, “We have ordered to send 45 days prior notices instead of 15 days notices to houses and markets that are built on amenity plots.”
Earlier yesterday (December 11), Supreme Court rejected the Sindh government’s petition to halt the Karachi mayor from carrying out a city-wide anti-encroachment drive and directed the provincial government to resolve the matter themselves with the civil administration.
A three-judge bench headed by Chief Justice of Pakistan Justice Mian Saqib Nisar heard a petition against the ongoing anti-encroachment drive in the metropolis at the SC’s Karachi Registry.
As the hearing went underway, the chief justice remarked, “We had asked for Empress Market to be made into a model and had not issued an order at the time. The work was initiated by the Karachi mayor on his own.”