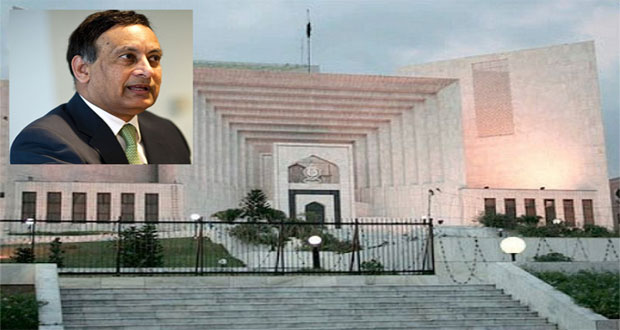 ISLAMABAD: The Supreme Court of Pakistan on Thursday tasked the National Accountability Bureau (NAB) to bring back Hussain Haqqani, former ambassador to US to Pakistan, who is accused in the Memogate scandal.
A three-member bench headed by Chief Justice of Pakistan Justice Mian Saqib Nasir heard the case.
During the hearing, Justice Nisar remarked that NAB has agreements with United Nations Security Council (UNSC) pertaining to the return of suspects.
According to amicus curiae (friend of the court) Ahmer Bilal Soofi, NAB can bring Haqqani back to Pakistan, the CJP said.
“NAB chairman can issue warrants for the former ambassador’s return,” Justice Nisar added and tasked the accountability bureau to bring him back.The bench observed that there are difficulties owing to a lack of repatriation agreements between Pakistan and other countries.
The top court recommended that laws be drafted for bringing back suspects to the country and directed the Parliament to make legislation on repatriation agreements with other countries within a month.
Earlier on August 07, the special assistant to Supreme Court in Memogate Case Ahmer Bilal presented the legal draft to bring back Hussain Haqqani saying he could not be repatriated through Interpol.
During the hearing of the case by a three-member bench headed by CJ Saqib Nisar, an international law expert and former federal law minister Ahmer Bilal Soofi as amicus curiae (friend of the court) in the Memogate case has presented the legal draft.
He informed the court that Haqqani could not be brought back to Pakistan through Interpol Red Warrant as there was no agreement between Pakistan and US over the exchange of criminals.
On which CJP asked can it not possible to bring back on SC request, Bilal told the court it was not possible and foreign office has already informed the situation.
He informed the court that the case of embezzlement in Pakistan foreign office can the alone reason for bringing him back, however, there is a need for legislation in this connection.
Apex court directed the Bilal to submit his recommendation to Attorney General and adjourned the hearing for an unlimited period.The memo case is pending before the apex court since 2012 when Justice Qazi Isa-led three-member commission had submitted its report to the Supreme Court but the case could not be pursued because of Haqqani’s absence.
He had committed to come back and face the charges but never returned.
The commission report, which has not yet been discussed by the apex court, was a complete charge sheet against the former ambassador of the last PPP government.
As against the perception created by some that Memogate had no grounds, the commission found it as act of disloyalty to Pakistan.