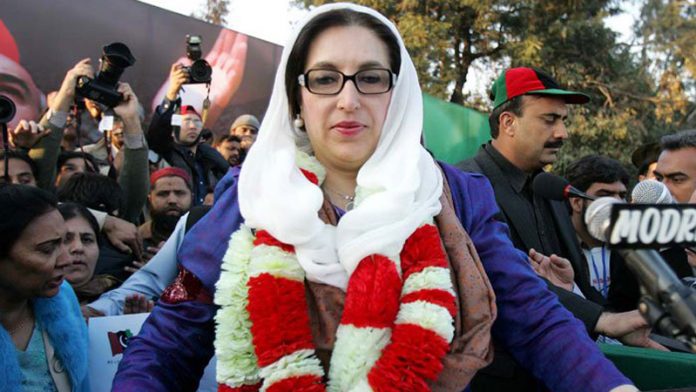 ISLAMABAD: The Supreme Court on Friday rejected a petition seeking the suspension of bails granted to two police officers accused in the murder case of former prime minister Benazir Bhutto.
A two-member bench headed by Justice Asif Saeed Khosa heard the petitions against the high court’s decision to grant bails to former City Police Officer (CPO) Saud Aziz and former SP Khurram Shahzad in the case.
After hearing the arguments, the Supreme Court rejected the petition and upheld the bails granted to the two police officers.
On August 31, 2017, an anti-terrorism court in Rawalpindi announced the verdict in the Benazir Bhutto murder case and announced 17-year imprisonment for two police officials — City Police Officer (CPO) Saud Aziz and Khurram Shahzad. However, the high court had later granted them bail.
Pakistan Peoples Party (PPP) Chairman Bilawal Bhutto Zardari, former premier Raja Pervez Ashraf, Farhatullah Babar, Mehreen Anwar Raja and other party leaders were present for today’s hearing.
As the hearing began, the petitioner’s counsel, Sardar Latif Khosa, informed the court that his client, Rashida Bibi, has passed away.
To this, the counsel of the police officers requested that the petition be declared ineffective following the death of the petitioner. However, Justice Khosa asked whether the petitioner’s family members had filed a petition and upon being told that Bibi’s daughter had in the last hearing become party to the petition, he rejected the request of the police officers’ lawyer to declare the petition ineffective.
Justice Khosa then asked Bibi’s lawyer to continue with his arguments and questioned on what basis the bails were granted. “Scotland Yard conducted an investigation and bails cannot be granted under the anti-terrorism act nor can Islamabad High Court’s constitutional powers be curbed under Article 199,” he added.
The head of the two-judge bench further remarked, “Benazir Bhutto was to be provided security and the CPO was responsible for it while Saud Aziz deployed the SSP and contingents of police.”
“BB was shot at point-blank range and before landing in Karachi she had named certain people,” he added.
Further, Justice Khosa questioned, “Did the state challenge the bail of the accused?” Responding to him, Latif Khosa said, “The state has challenged their bails and I have also requested the chief justice of Pakistan to fix a date for the hearing of our petition but it has not been fixed even once.”
Latif Khosa further said, “The accused in violation of the law did not even conduct a postmortem. How can they be granted bail when they were sentenced to 17 years in prison by the ATC?”
The petitioner’s lawyer added, “The CPO was involved in the controversy from day one.” Questioning once again how the bail can be granted, he added, “Musharraf is also accused in the case.”
To this, Justice Khosa remarked, “BBC produced a 10-series documentary report on the murder and conducted more investigations for it than our agencies did. ”
“We also have to consider the angle that whether innocent people are being trapped in the case,” he added.
Latif Khosa then turned to the head of the bench and said, “You say that bails were suspended owing to doubts. The trial court never took this case seriously.”
“The most visionary leader of the region was mercilessly killed and the Scotland Yard said the accused were responsible while Pervez Musharraf controlled everything,” he added.
To this, Justice Khosa remarked, “The point that Musharraf was controlling everything is hypothetical.” However, Latif Khosa said, “Testimonies of the incident provide evidence for it.”
Further, the head of the two-judge bench said, “BB’s martyrdom was also a trauma for me. When they were washing the crime scene, I was shocked and also asked my friends what they were doing as doubts can never replace evidence.”
Latif Khosa then remarked, “We have destroyed courts by saying that suspects are the favoured children of courts. The high court dealt with this case as if it was a theft case.”
To this, Justice Khosa said, “For a decision you need evidence.”
Latif Khosa then urged the court to cancel the suspension of the police officers’ bails and said the trial can continue. However, Justice Khosa questioned, “What have we gotten that we should cancel the suspension of bail?” To this, Latif Khosa responded, “It is not a matter of what we have gotten or lost but a matter of the rule of law.”
Justice Khosa then remarked, “It has been a year since the suspects were granted bail.” Latif Khosa in response said, “That is your fault.”
When asked what he will get if the police officers are sent to jail, Latif Khosa said, “This is a question of violation of law.”
In his arguments, Khalid Ranjha, the counsel of the police officers said his clients were not named in the case initially. “Their names were added on November 13, 2010,” he said.
Justice Khosa then asked Ranjha, “Have the accused during their careers washed other crime scenes as well? Training is given to secure crime scenes.”
“Ask the accused why they did something as unusual as wash the crime scene,” he added.