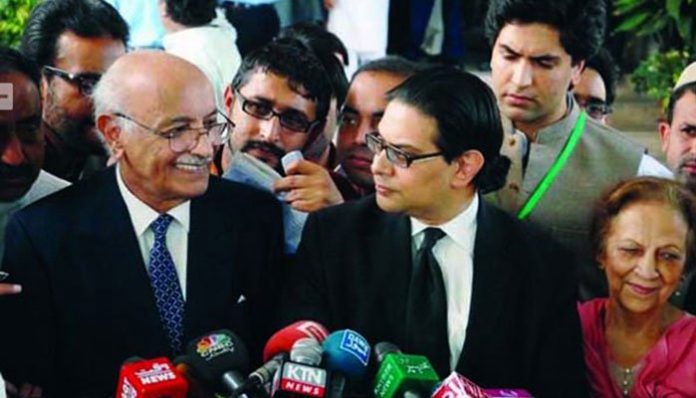 ISLAMABAD: The Supreme Court of Pakistan on Monday rejected a plea seeking to adjourn hearing of review petitions in Asghar Khan case.
A three-member bench headed by Chief Justice Mian Saqib Nisar heard the case.
Former army chief General (retd) Aslam Baig adopted stance that he received information of the hearing a day before due to which he was not able to prepare the case. He requested the court to adjourn the hearing.
The CJP remarked that the court will not grant the adjournment and will hear the case today.
“Give remarks in the case yourself. We are not recognizing the pending request however; some time is being provided for the preparation of the case. Air marshal (retd) Asghar Khan’s lawyer has to brief the case. We will resume the hearing after a break,” he maintained.
While concluding the arguments, the court set 2:30pm to hear the case.
The famous Asghar Khan case was filed by the late former chief of the Pakistan Air Force (PAF) retired Air Marshal Asghar Khan alleging that country’s intelligence agency had provided Rs140 million to the politicians in the 1990s to form the Islami Jamhoori Itehad (IJT) in order to prevent PPP from winning the polls of the 1990 general elections.
The case has been shrouded in complexities as many former army officers including former ISI Chief General (Retd) Aslam Baig and PM Nawaz Sharif were involved.
Hearing of the case was started in 1996 by the Supreme Court (SC) of Pakistan. A detalied judgement was reached in November 2012 by 3 member bench of SC comprising then Cheif Justice Iftikhar Chaudhary, Justice Jawad S Khawaja and Justice Khilji Arif Hussain. The decision stated that action should be taken against those involved. The detailed order also stated that the late president Ghulam Ishaq Khan, former army chief General (r) Aslam Beg, and ISI ex-DG General (r) Asad Durrani, acted in violation of the Constitution by helping politicians to secure their success against their opponents in the elections of 1990 for which they received funds from Younis Habib.
In light of this decision, a team of FIA had investigated the case under the supervision of then FIA Additional Director General Galib Ali Bandesha, but the inquiry was never completed as the PPP regime during that time lost interest as FIAs development of the case remained slow.
Investigation into the case again picked up in April 2015 with FIA Director General Akbar Khan Hoti forming a joint investigation team (JIT) under the supervision of FIA Additional Director General Khalid Qureshi including FIA Punjab Director Dr Usman Anwer and some other senior directors of FIA as members of the team. The JIT was formed on the orders of former interior minister Nisar calling the team to finalize the case and speed up the process of the case.
Statements of Air Marshal (retd) Asghar Khan, former ISI DG Lt-Gen (retd) Asad Durrani, former banker Younis Habib and former Zonal Chief of HBL Younus Memon were recorded in the case.