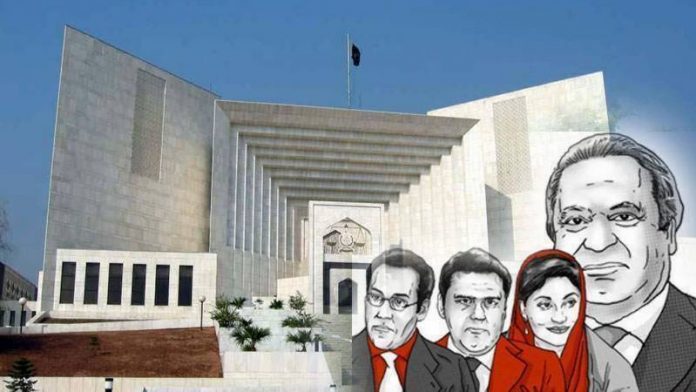 ISLAMABAD: Supreme Court (SC) on Friday has reserved verdict on Panama Papers implementation case after hearing the arguments of all the parties over Joint Investigation Team (JIT) report.
A three-member SC bench comprising Justice Ejaz Afzal, Justice Sheikh Azmat Saeed and Justice Ijazul Ahsan resumed the hearing of Panamagate during which Prime Minister (PM) Nawaz Sharif’s children lawyer Salman Akram Raja completed his arguments whereas Federal Minister for Finance Ishaq Dar’s counsel and Pakistan Tehreek-e-Insaf (PTI) representative Naeem Bokhari also put forward their stances.
The date for announcement of the verdict will be released later.
The Supreme Court (SC) on Friday opened Volume X of the joint investigation team’s (JIT) report, which was earlier marked “confidential”, also providing a copy of the chapter to Nawaz Sharif’s lawyer Khawaja Harris.
The Panamagate case is being heard by a three-member bench of the SC, headed by Justice Ejaz Afzal and comprising Justice Sheikh Azmat Saeed and Justice Ijazul Ahsan.
The JIT, tasked with investigating allegations of money laundering against the Sharif family, submitted its report to the SC on July 10. Volume X of the report, titled “Mutual Legal Assistance Requests ─ Ongoing”, is related to JIT’s international correspondence and the documents obtained from foreign countries during the investigation.
In their objections to the JIT report, filed before the SC earlier this week, the Sharif family and Finance Minister Ishaq Dar had described the investigators’ request to withhold Volume X “mala fide”. During Monday’s proceedings, the judges had also expressed their willingness to consider making Volume X public.
“The volume contains details of the JIT’s correspondence and will help clear a number of things,” Justice Azmat Saeed told Harris, adding that the chapter was being opened on the lawyer’s request.
The judges directed that the volume would not be shown to anyone else for now.
Continuing his arguments before the court, Salman Akram Raja, the lawyer representing Prime Minister Nawaz Sharif’s children, sought to appease the judges’ objections to the documents that he had submitted a day earlier.
The bench had questioned the authenticity of the documents submitted by the lawyer on behalf of his clients, pointing out that the trust deed ─ executed between Maryam Nawaz and Hussain Nawaz in February 2006 ─ was signed on Saturday in a country where it was not possible to seek official appointments on a holiday.
“Plenty of barristers and solicitors work on Saturdays ─ even Sundays ─ in London,” the lawyer told the court. Justice Ijazul Ahsan replied that, on the contrary, Hussain Nawaz had said that making such appointments on Saturdays was not possible.
The counsel reiterated before the bench that Maryam Nawaz, the PM’s daughter, was not the owner of the Avenfield flats in London. “The [JIT’s] report shows that Maryam Nawaz is the beneficial owner of the flats,” noted Justice Ejaz Afzal, adding that her ownership of the off-shore companies was not included in the tax returns of her husband, Captain Safdar.
“If the court concludes that the ownership is not included in the [tax] returns, then the Representation of the People’s Act 1976 will be applicable,” said Justice Ejaz Afzal.
Raja admitted that there were “clerical errors” in the 2006 trust deed, saying that the mistakes were made during the initial proceedings of the Panamagate case when Advocate Akram Sheikh was representing the PM.
According to Raja, Hussain Nawaz had received all the capital from his grandfather Mian Mohammad Nawaz. “Parents cannot bear the responsibility if the son cannot present evidence of his assets,” he said.
Justice Ejaz Afzal remarked that the PM was answerable before the courts as he holds a public office.
During the final hearing today, Advocate Salman Akram Raja, the legal counsel for the PM’s children, resumed his arguments with the beginning of hearing for fifth consecutive day.
The court observed that it will operate strictly within the remits of the law and not trample anyone’s individual rights.
During the hearing, the counsel for the prime minister’s children, Salman Akram Raja, completed his arguments and earned appreciation from the bench.
The bench also directed for the controversial Volume 10 of the JIT report to be made available to the premier’s counsel, Khawaja Harris.
The three-member bench, headed by Justice Ejaz Afzal Khan and comprising Justice Sheikh Azmat Saeed and Justice Ijazul Ahsan, also heard the arguments of Finance Minister Ishaq Dar’s counsel as well as the National Accountability Bureau (NAB) deputy prosecutor general.
Dar’s counsel submitted additional documents to the court and hoped it would answer the queries raised by the court earlier.
The NAB prosecutor informed the bench that they will ‘soon’ decide whether to reopen the Hudaibiya Paper Mills case.
Once the respondents’ counsels completed their arguments, Pakistan Tehreek-e-Insaf’s (PTI) counsel Naeem Bukhari gave his response on the replies of the respondents.
The counsel for the premier’s children, Raja, informed the bench that there are several law firms in London that operate on Saturdays, to which the bench agreed.
The counsel also clarified before the bench that the firm of his predecessor, Akram Sheikh, may have made a clerical error which led to a confusion of dates regarding ownership of offshore companies by the premier’s children.
“We cannot even think of submitting false documents in court,” claimed Raja.
During the hearing, the bench also directed the production of volume 10 of the JIT report, with Justice Azmat observing that they want to keep everything transparent.
The bench asked the prime minister’s counsel, Khawaja Harris, to examine specific sections of the volume.
Volume 10 of the report was kept confidential at the time the JIT report submitted its final report. The JIT had asked the Supreme Court not to make the volume public as it contained material related to ongoing international cooperation in the investigation against the Sharif family.
Raja informed the bench that the prime minister’s children are responsible for their own businesses, saying their grandfather aided them financially till 2004.
Presenting his arguments, Raja claimed that the Qatari prince was not given the option of recording his statement via video link.