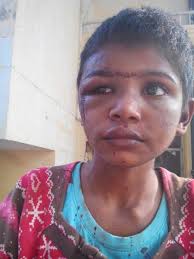 ISLAMABAD: While hearing the torture case of child maid, Tayyaba, the Supreme Court Tuesday ordered the federal government to submit an initial draft bill against domestic child labour.
According to our correspondent, a three-member bench led by Chief Justice Saqib Nisar resumed hearing of the case involving torture on 10-year-old girl Tayyaba allegedly by a serving judge and his wife.
Judge Raja Khurram Ali Khan and his wife, Meheen Zafar, the two prime accused in the case, have been granted exemption from appearance.
The accused couple is yet to be charge-sheeted following a police report that has found the judge and his wife responsible for torture.
In today’s proceeding, the bench inquired from government lawyers about progress in the case. “Have the accused been indicted?” asked the CJP from Advocated General Islamabad.
He informed the court that the case has been shifted to Islamabad High Court, adding that challans have been filed in the case for a final charge-sheeting. He said the accused have been summoned for April 27.
Additional Attorney General Rana Waqar said the government was discussing a bill with stakeholders to eradicate domestic child labour, adding that it would be presented in court soon.
Justice Nisar instructed the attorney general to show the final draft of the bill to all stakeholders and inform the court about their comments.
“This societal menace needs to be abolished and it would be if all children are educated under the constitutional provisions of free education for children,” Justice Nisar observed.
The hearing was adjourned till next week.
The Supreme Court has directed authorities to shift Tayyaba, a child maid allegedly tortured by employer’s family in Islamabad, to SOS Children’s Village for two months.