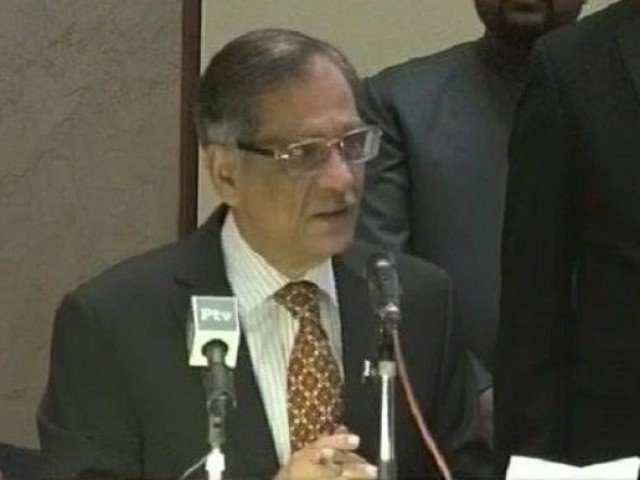 QUETTA: Chief Justice Mian Saqib Nisar on Monday directed the last two former chief ministers of Balochistan — Dr Abdul Malik Baloch and Nawab Sanaullah Zehri — to appear before the apex court and explain what they did for the improvement of governance in the province during their respective tenures.
A three-member bench of the Supreme Court, headed by the CJP, was hearing cases at the court’s Quetta registry regarding the plight of public hospitals and medical colleges, and the doctors’ strike in the province.
“Three chief ministers came during one tenure but what did they do for improvement of governance?” the CJP asked. “Call these chief ministers who ruled here for more than four years.”
The incumbent Balochistan chief minister, Mir Abdul Qudoos Bizenjo, also reached the apex court along with Health Minister Mir Majid Abro.
Over one million children in the province remain out of schools, Secretary Education Noorul Haq Baloch informed the court, adding that around 2.6m children should have been currently enrolled in schools.
“Why has the government failed to enrol out of school children?” the chief justice asked.
Secretary Health Saleh Nasar informed the court that a policy was being planned within the next ten days to improve the condition of government-run hospitals.
“Let us know what help you require from the federation,” the CJP told the officials. He also expressed his surprise upon learning that the OPDs in public hospitals of the province had been closed down.
The CJP repeated his commitment to ensuring medical colleges don’t charge exorbitant fees. “We want the money to be returned to 20 million students,” he said, adding that all the amount above Rs856,000 in annual fees should be returned by the medical colleges.
“Unfortunately, our medical colleges are substandard,” he remarked.
Justice Nisar asserted that he would want provision of water and healthcare to become the primary focus of the government. “According to Articles 184 and 199 of the Constitution, we have the right to intervene wherever basic human rights are violated.”
The chief justice later visited Quetta Civil Hospital where he interacted with the patients and visited the strike camp of paramedics and young doctors. He ordered the authorities to listen to the protesting medics’ demands and present a report to him following which the medics called off their strike.
Chief minister Balochistan and other officials also accompanied the chief justice during his visit.
The bench is expected to continue hearing cases at the Quetta registry until Wednesday.