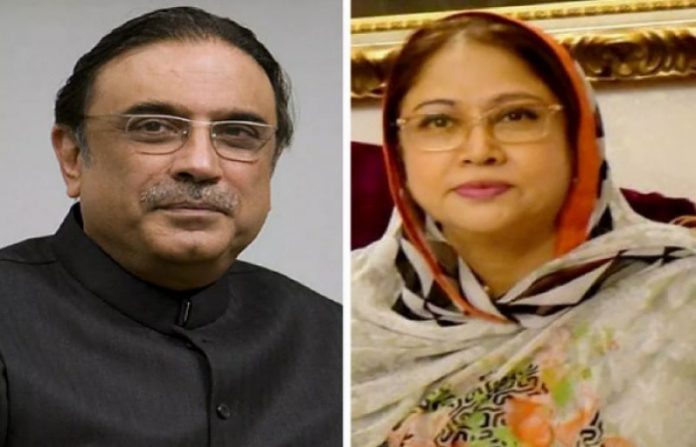 LAHORE: A three-member bench of the Supreme Court headed by Chief Justice of Pakistan Mian Saqib Nisar will hear money laundering case on Monday (December 24).
The court, during Monday’s hearing, is expected to hand over the Joint Investigative Team report to the PPP leader’s legal team.
Earlier on Friday (December 21), Karachi’s banking court had extended the interim bail granted to former president and PPP Co-Chairman Asif Ali Zardari and his sister Faryal Talpur in a money laundering case.
The judge granted an extension in the PPP leaders’ bail until Jan 7. This is the fourth time they have been granted extension in their bail.
Zardari and Talpur are facing a probe into a money laundering scam involving over Rs35 billion laundered through fake bank accounts. Zardari’s close aides Hussain Lawai and Anwar Majeed, head of the Omni Group are also being investigated in the scandal. They both are in custody.
A Joint Investigation Team (JIT) formed to probe into the mega money laundering scam had submitted its report to the Supreme Court.
The JIT report, comprises over 7500 pages and more than a dozen volumes, points out involvement of a key politician from Sindh in money-laundering through fake bank accounts, sources said.
The report submitted in the apex court also complained that the government of Sindh didn’t extend satisfactory cooperation to the investigation team.
According to sources, the report also said to be attached the evidence against Omni Group of Companies for their involvement in money-laundering.
It is pertinent to mention here that, Supreme Court had constituted a six-member joint investigation team to investigate the case.