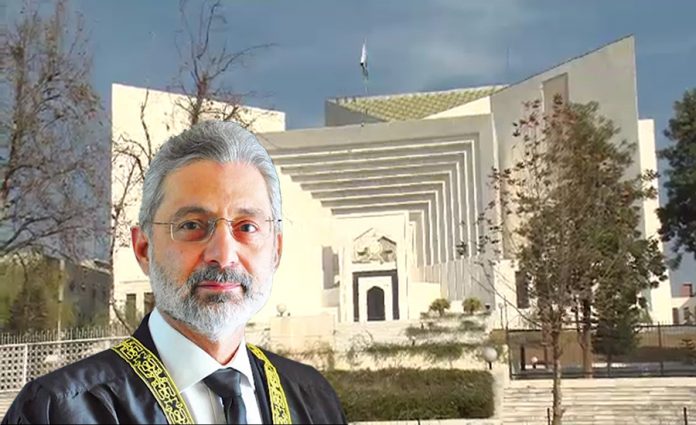 ISLAMABAD: Supreme Court Bar Association (SCBA) on Wednesday filed a review petition against the verdict of Justice Qazi Faez Isa case in Supreme Court of Pakistan (SCP).
The SCBA petition requests Supreme Court to remove paragraphs 3 to 11 of June 19 decision. President of Pakistan, Federal government and Supreme Judicial Council have been made respondents in the petition.
It is pertinent to mention here that Supreme Court (SC) has rejected the presidential reference against Justice Qazi Faez Isa. The short verdict was announced by Justice Umar Ata Bandial, leading the 10-judge full court bench hearing the case.
The case was wrapped up after Justice Isa’s spouse provided the money trail pertaining to her foreign properties and the Federal Board of Revenue (FBR) provided its input on the matter.
The full court has also withdrawn the show-cause notice against Justice Qazi Faez Isa.
Seven judges referred matter to the FBR for tax proceedings against Justice Qazi Faez Isa s wife & children, however, three judges Justice Baqar, Justice Mansoor and Justice Yahya did not endorse majority view to refer matter to FBR.
The short verdict stated that the top court ordered the concerned Commissioner of Inland Revenue shall himself issue appropriate notices under the Income Tax Ordinance, 2001 (“2001 Ordinance”) to the spouse and children of the Justice Qazi Faez Isa to offer an explanation regarding the nature and source of the funds separately for each property that are in the names of the spouse and the children were acquired.
The short verdict stated that, “The notices shall be served at the official residence of Justice Qazi Faez Isa at Islamabad through courier service and such other means as may be considered appropriate and shall be deemed served on the respondents when received at the said address.”
It stated that, “The respondents shall furnish their replies to the notices along with such material and record as is deemed appropriate. In case any of them is outside the country, it shall be the responsibility of such person to timely file a response, and the proceedings before the Commissioner shall not be adjourned or delayed for the reason of non-availability in Pakistan of such person.”
The top court ordered the Commissioner to complete its investigation in 60 days. It said, “The proceedings shall be concluded before the Commissioner within 60 days of the date of receipt of the notices as aforesaid, and the order shall be issued by him within 75 days of the said date of receipt, and no adjournment or extension in time whatsoever shall be given as affects or extends the aforesaid periods.”
The apex court remarked that the Supreme Judicial Council (SJC) will be informed within 75 days.
The verdict stated that within 7 days of the issuance of the order by the Commissioner, the Chairman, Federal Board of Revenue (“FBR”) shall submit a report (to be personally signed by him) to the Council through its Secretary (i.e., the Registrar of the Supreme Court) regarding the proceedings as aforesaid, appending thereto the entire record of the said proceedings.
The government had filed a Presidential Reference against Justice Isa last year, accusing him of acquiring three properties in London on lease in the name of his wife and children during the period from 2011 to 2015. The government said that Justice Isa did not disclose the assets allegedly owned by him in London.
Justice Isa contested the allegations, saying that he was not a beneficial owner of the flats. He neither owned the property directly nor indirectly.