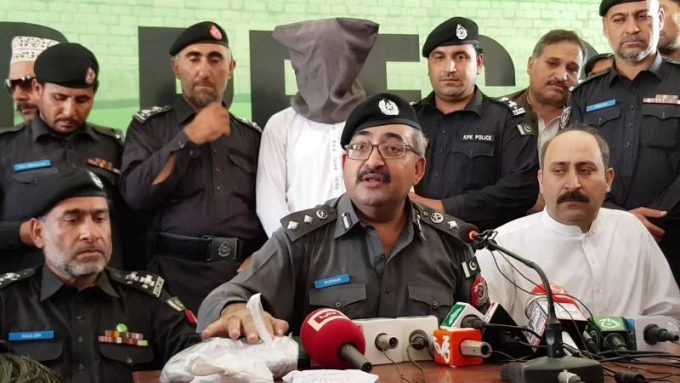 JAMRUD: Khyber police has arrested a schoolteacher in the murder case of a six-grader in Jamrud.
Khyber District Police Officer Mohammad Hussain announced the arrest at a press conference.
The teacher, Roidad Khan, was presented before the media with a veil over his face.
DPO Hussain narrated the details of the case. Kashif, 15, went missing after school on October 7 from the New Abadi area. His bullet-riddled body was found a day later in a deserted area of Teddy Bazaar.
He said this was the first blind murder case of Khyber since its merger with Khyber Paktunkhwa.
DPO Hussain said the police arrested over a dozen other people in the case too, but Roidad confessed to killing Kashif. Quoting the arrested man’s statement to the police, the DPO said Roidad said he had told Kashif not to have a friendship with certain people, but Kashif did not listen to him. So Roidad got angry and killed him, he said.
Police has also seized the murder weapon and motorbike used by Roidad and Kashif’s mobile phone, DPO Hussain said, thanking the media on the ‘strong’ coverage of the case. He also announced a reward of Rs20,000 for the law enforcers involved in solving the murder case.